For now, CT won’t have to give records to U.S. voter fraud panel 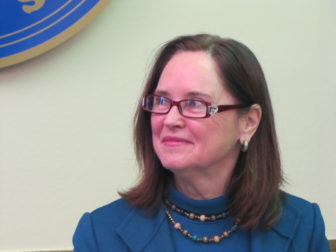 A presidential advisory commission tasked by President Donald J. Trump with investigating voter fraud faced a setback Monday after lawsuits filed in federal court put a hold on its request for voter records from Connecticut and all other states.

The Presidential Advisory Commission on Election Integrity has asked states not to submit any voter records until a lawsuit filed by Electronic Privacy Information Center last week is resolved. The suit is seeking a temporary restraining order on the commission’s request for voter records, including birth dates and partial Social Security numbers.

Two more lawsuits, both filed Monday, claim the commission has violated the Federal Advisory Committee Act. One was filed by the American Civil Liberties Union and the other by the Lawyers’ Committee for Civil Rights Under Law.

The ACLU’s suit alleges the commission’s first meeting was not open to the public and the panel does not have a balanced membership – both of which are required under the law.

The commission is headed by Vice President Mike Pence, and Kansas Secretary of State Kris Kobach is its vice chair. It is informally known as the Pence-Kobach commission.

Trump created the commission to look into what he says was widespread voter fraud during the 2016 elections. He alleges that between 3 million and 5 million people voted illegally, costing him a win in the popular vote. Kobach has said he thinks Trump is correct.

Election experts and state officials have called the allegation false. Connecticut Secretary of the State Denise Merrill said the number seems “completely out of proportion.”

The commission’s stated rationale for collecting the voter records is to determine whether voter fraud was committed by comparing them to other federal registries of undocumented people living in the country. Merrill called the method “clumsy” and said it would not work. U.S. Sen. Richard Blumenthal said Friday the comparison would produce “false positives.”

Merrill said she would provide only the state’s public voter records if the federal commission filed a formal Freedom of Information Act request and paid the required $300 fee. She said she would not provide private data that was requested, such as partial social security numbers.

Merrill initially expressed a willingness to provide the public data to the commission without requiring it to go through the formal process, though she also sent the panel a list of questions about how the data would be used.

She changed her mind days later, she said, when it became clear the commission legally would be required to submit a Freedom of Information Act request. And during that time, she also grew more concerned about the commission’s intentions, she said.

“I’m becoming more and more concerned about why this data is being requested and, at this point in time, having a centralized database at the federal level seems to be very unwise,” Merrill said. “So I will await the court’s decision among others, now, and the answers to my questions before I will actually release it.”

Merrill spent the weekend with her counterparts from other states at a National Association of Secretaries of State conference in Indianapolis. She is the organization’s president.

The request for voter records was at the forefront of the weekend’s discussions, Merrill said. Kobach, who normally attends the meetings, was absent, she added.

“He should have been here,” Merrill said. “He is a secretary.”

Notably, Merrill said, it appears the commission’s request for the voter records came from Kobach alone, not the commission as a whole. While Kobach was not present to answer questions, four secretaries who are on the commission – two Democrats and two Republicans – told those in attendance they had little or no knowledge of the decision, she said.