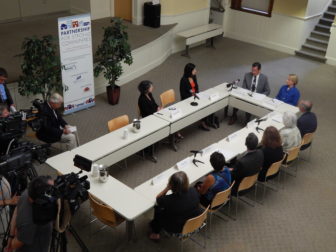 Gov. Dannel P. Malloy wants state lawmakers to know that if budget gridlock persists, the results will be on full display.

Malloy began showcasing the fallout Monday at The Lyceum in Hartford, where he held a roundtable on looming setbacks in the fight to end homelessness if a budget is not passed soon.

The mood around the table was somber, which Housing Commissioner Evonne Klein said felt unusual.

“Usually, this is a happy, smiling group of folks,” she said.

Homelessness in Connecticut has fallen by 24 percent over the past three years in large part because of increased cooperation and coordination at a regional and state level to better allocate resources. Some of those resources will begin to disappear if the state does not pass a budget within the next few weeks.

The state’s expansion of its rental assistance program, which provides housing subsidies for some of its neediest individuals, has played a significant role in making more affordable housing available. Under the governor’s executive order – which determines how the state allocates its funds in the absence of a budget – that program is cut by $4.5 million.

Klein said the state was able to make July rental subsidy payments, and expects to make the August payments. After that, however, it will have to begin taking subsidies away from some recipients.

State funds for supportive housing providers through the Department of Mental Health and Addiction Services could end sooner. Supportive housing includes services for people with mental health, substance abuse and other problems.

The state extended its contracts with supportive housing providers through the end of July, but plans to reevaluate and eliminate those contracts it cannot afford beginning in August, said a spokesman for the governor’s budget office.

Malloy said he remains open to a so-called “mini-budget” to run the state on a quarterly basis, but would prefer a full two-year budget.

During the panel discussion, Malloy was thanked for vetoing a bill that would have loosened the state’s affordable housing standards. In a lighthearted moment, Malloy replied wryly, “You didn’t think I would sign it?”

He said a possible override vote by the General Assembly “would be a mistake.”