‘Connecticut in the Capitol’ focuses on health care, attacks on the press 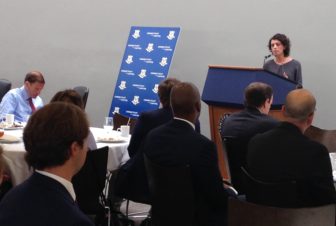 Journalist Molly Ball of The Atlantic gives the luncheon address during the “Connecticut in the Capitol” event.

Washington – Dozens of Connecticut officials, business executives, policymakers and leaders of non-profits are here for two days to network and try to figure out what Congress and the federal government are doing, which is stumping even the most knowledgeable insiders lately.

About 140 Connecticut residents accepted the invitation of Sens. Richard Blumenthal and Chris Murphy to attend a series of seminars on Tuesday and Wednesday as part of the “Connecticut in the Capitol” event.

“I find myself coming to Washington more and more because there are more and more problems and greater complexity to the problems,” said attendee Mark Lauretti, the Republican mayor of Shelton.

To Lauretti, who is running for governor, a seminar on the future of manufacturing was of special interest “because we used to make everything in Connecticut.”

But the hottest topic was health care as Senate Majority Leader Mitch McConnell struggles to produce legislation that would repeal and replace the Affordable Care Act and attract enough GOP support to pass.

Molly Ball, a staff writer for the Atlantic who gave a luncheon address, said her Republican sources told her McConnell’s effort “is not going good.”

“Mitch McConnell has a reputation of being able to pull a rabbit out of a hat, but right now the hat appears empty,” she said.

“Connecticut in the Capitol” was an event begun by former Sen. Chris Dodd, but discontinued after he left office – until the state’s current U.S. senators re-established it two years ago.

“We all live in our little bubbles, and I’d like to hear from other people,” he said.

Sen. Chris Murphy said he wanted to host the series of seminars to try to pierce the “cloud of secrecy in Washington” about key issues like health care and “get feedback” from state residents.

“The stakes couldn’t be higher for Connecticut right now when it comes to the issues we’re dealing with,” Murphy said.

Other panels focused on transportation and infrastructure and even “fake news,” and the effect attacks on the press have on the media and the current political climate.