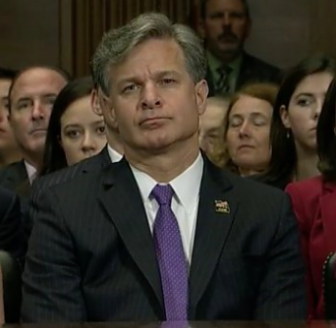 Christopher Wray prepares to testify before the Senate Judiciary Committee.

Back in 1991, in his final year at Yale Law School, Christopher Wray’s peers nominated him to stabilize the law review, where ambitious experiments under the previous class had gotten in the way of carrying out basic responsibilities.

Now Wray’s even-keeled manner is being sought once again: this time at the Federal Bureau of Investigation, where the agency’s been spinning since President Donald J. Trump fired Director James Comey in May.

On Wednesday, Wray, a 50-year-old lawyer with a reputation for steady, principled leadership, faced questioning by the Senate Judiciary Committee, before the entire body takes a vote on whether to confirm him as the next director of the FBI, the nation’s top law enforcement agency.

At the confirmation hearing, Wray vowed to resist political pressure and preserve the agency’s integrity. Those who knew him during his New Haven days, from both sides of the aisle, portrayed him in interviews as true to that image.

In the aftermath of the 9/11 attacks, Wray helped the feds adjust to the new threat of global terror. Then, as an assistant attorney general, Wray oversaw the criminal division from 2003 to 2005, where he directed prosecutors to pursue corporate fraud cases.

Most recently he worked as a defense lawyer in Washington, D.C., for King & Spalding, representing New Jersey Gov. Chris Christie in the “Bridgegate” scandal, in which political operatives were accused of closing lanes on the George Washington Bridge to punish one of the governor’s opponents; and others involved in white-collar criminal and regulatory enforcement matters.

Aside from his top-notch pedigree, Wray’s law school classmates focus on perhaps his earliest leadership role, as executive editor of the Yale Law Journal, as proof that his reserved manner belies his ability to take control of a chaotic situation.

Most law school classmates contacted by the Independent couldn’t remember much about Wray, indicative of his under-the-radar approach.

Wray used “no unnecessary words,” is how Nora Demleitner, now a professor at Washington and Lee University School of Law, put it.

Wray’s listing in the 1992 yearbook

He was often seen on campus wearing Oxford cloth button-downs or in East Rock with Helen Howell, a college classmate he married a month before law school. Wray kept the trim figure he’d developed rowing lightweight crew (guided by a now-famous coxswain, Anderson Cooper) with regular workouts at Payne Whitney gymnasium. In class, he wasn’t the type to raise his hand constantly.

“There was a lot of drama at Yale, and Chris tended to stay above the fray,” said his friend Amy Jeffress, who called him “exceptionally mature.” Even in a class of ambitious students, Wray stuck out as serious, focused and determined, several said. That won him respect from his classmates, she added, which contributed to his elected position on the Yale Law Journal.

The year before, marking the centennial volume of the law review, Wray’s predecessors had fallen “woefully behind in delivering the YLJ issues during their tenure,” said Michael G. Fraunces, now president of a wireless services company in San Diego. Partially that was because they had “a massive issue to produce” alongside hosting celebratory galas and alumni weekends —  “certainly more work than the editorial boards typically took on,” noted Adrienne D. Davis, an alumna from the class before who’s now vice provost at Washington University in St. Louis.

“Our board was probably a bit over-ambitious in our selection of articles, in terms of number and length,” added Martin Katz, now a professor at University of Denver’s Sturm College of Law. “And when you add big-name professors to the mix, the cat-herding exercise gets challenging.”

That year they also attempted an unusual structure for the leadership team, forming a five-member executive committee of essentially co-editors, rather than one editor-in-chief —  an attempt to make the board more inclusive and less hierarchical. It was a fitting change for the year with the first black woman to head the law journal, Davis, and the first open lesbian, Jacqueline Charlesworth. But striving for consensus also led to some delays in decision-making. “By the end of the year, there were some differing opinions on who should be responsible for what,” Katz said.

The following year, both the outgoing and new leadership set a goal to deliver all eight issues on time. They returned to the old hierarchy, and Wray was selected for a top position on the masthead as he sought to return the law review’s focus to its most basic function of publishing thought-provoking articles by the sharpest minds.

“I am sure Chris was chosen, in part, because of his organizational skills, diligence and willingness to push, as one of the key challenges in delivering issues timely is to get the articles and essay authors to hit deadline,” Fraunces said. Which was no easy task, when the authors were respected law professors at other schools, who might have competing priorities for deadlines or resist substantial editing.

While the editor-in-chief was the public face of the journal, Wray’s role, as one of two executive editors, was getting articles into final shape for publication —  a good job for a “particularly diligent, exacting guy,” said Gary Rowe, now a federal public defender in Los Angeles.

At the Law Journal, Wray proved to be “hard-charging and hard-working, task-oriented and focused,” Demleitner added.

Wray’s boatmates, including Anderson Cooper at the bow, race against Dartmouth and Rutgers in 1989.

Comey’s press conference about Secretary of State Hillary Clinton’s email server and his recent testimony before Congress about President Trump’s questions about the investigation into Russian tampering with the election made him a media celebrity. Wray’s friends predicted he won’t take up as much of the spotlight.

Wray is said not to be a partisan; nobody with whom the Independent spoke could remember him talking about politics. He has donated at least $35,000 to Republicans over the last decade. He did not contribute to either presidential candidate in the 2016 election.

“He also has impeccable integrity and a steady hand, which will be valuable in this difficult environment,” said Jeffress, who knows a thing or two about what FBI agents respect after serving as a high-ranking attorney at the Department of Justice, counseling Eric Holder on national security and international matters, before entering private practice.

After abruptly firing Comey before his 10-year term was set to end, Trump ran through a long list of potential candidates (including former Connecticut U.S. Sen. Joseph Lieberman) before settling on Wray, whom he called “a man of impeccable credentials” in his announcement of the decision on Twitter in June.

“I look forward to serving the American people with integrity as the leader of what I know firsthand to be an extraordinary group of men and women who have dedicated their careers to protecting this country,” Wray said in a statement.

His former friends said they can’t wait for him to step into the role. “My impression is he will doggedly do the job required based on the facts and the law,” Fraunces said, “regardless of the consequences for whoever appointed him, his personal reputation or that of the FBI.”