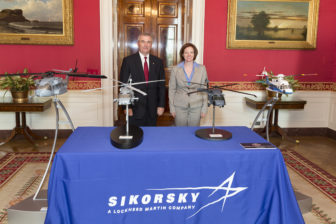 Models of Sikorsky helicopters on display in the Red Room of the White House. With them are Sikorsky representatives Steve Callaghan and Damask Petrick.

Washington – There aren’t likely to be many times Sen. Chris Murphy goes to the White House to help President Donald Trump promote policy, but Monday’s “Buy American” event was one of them.

“I know Sikorsky very well. … I have three of them,” Trump told a Sikorsky executive.

The executive thanked the president for being “a loyal customer for many, many years.” Sikorsky also makes the Marine One presidential helicopter.

Trump then asked how the new Sikorsky S-76D, a commercial chopper, is doing.

“It’s doing better. It’s starting to get a lift in market share,” the Sikorsky executive said. “We’re finding some export markets. There’s nothing better than making something here and selling something abroad.”

Trump also praised American products that were brought to the White House for the event, including baseball bats made in Louisiana, china from West Virginia – “It was a great victory in West Virginia,” Trump said — and horseshoes made in Massachusetts.

The president also tried on a Stetson hat, made – where else?– in Texas.

Products made by every other state in the nation lined the White House halls.

“We want to build, create, and grow more products in our country using American labor, American goods, and American grit,” Trump said before he signed his “Made in America” proclamations. “When we purchase products made in the USA, the profits stay here, the revenue stays here, and the jobs — maybe most importantly of all — they stay right here in the USA.” 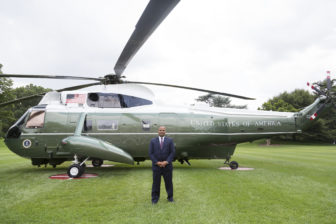 A Sikorsky-made presidential helicopter on the south lawn of the White House with company representative Samir Mehta.

Murphy attended the event. For several years, the senator has pressed for legislation that would tighten regulations requiring federal agencies to give preference to American companies. One bill would require the Department of Defense for the first time, to take into account U.S. jobs when awarding government contracts to manufacturers. Another would close loopholes that allow federal agencies to waive Buy American requirements and increase from 50 to 60 percent the amount of U.S.-based materials a product would have to have before it qualified as American-made.

Murphy said he met with representatives of Sikorsky and also baker Pepperidge Farm, which is based in Norwalk.

“I also talked to key White House staff about our mutual interests in advancing Buy American. I’m hopeful we can find some common ground on the Buy American policies I’ve been pushing,” Murphy said

Trump has signed an executive order aimed at ending an “abusive” use of waivers and exceptions to federal “Buy America” laws and ordered an audit to determine how many waivers have been granted.

Some Democrats, however, call Trump hypocritical for his “Made in America” campaign, accusing the president of outsourcing many products, and his daughter, Ivanka Trump, of making her products exclusively in foreign factories.