Washington – After the collapse of the GOP Senate health care bill, Sen. Chris Murphy said Tuesday he is willing to compromise, including allowing health plans on the individual marketplace that are not compliant with the Affordable Care Act.

One of the staunchest defenders of the ACA in the Senate, Murphy said he could support “flexibility in benefit design.”

Democrats like Murphy were hopeful on Tuesday they would finally have a role in any effort to change the nation’s health care system and would be able to improve on, not eliminate, the Affordable Care Act.

But whether that will come to pass isn’t clear.

“We’re willing to rescue them, but I don’t think they are willing to take our offer,” Murphy said of Senate Republicans.

President Donald Trump on Tuesday said he was “very disappointed” with the latest blow to his stalled legislative agenda.

Efforts to win approval of a bill in the Senate that would repeal and replace the Affordable Care Act collapsed Monday night after two Republican senators, Jerry Moran of Kansas and Mike Lee of Utah, joined two other GOP colleagues who had already announced their opposition to the bill, called the Better Care Reconciliation Act. The GOP could only afford to lose two Republican votes.

Even though there may not be enough support for the legislation, Senate Majority Leader Mitch McConnell plans to hold a vote next week on a “repeal only bill” that would phase out the ACA after two years. That would give the GOP some time to craft a replacement bill that would garner enough support to pass.

“They want flexibility; we want affordability,” he said.

Murphy said any compromise bill would have to eliminate the BCRA’s proposed cuts to Medicaid and “tax cuts for the rich.” 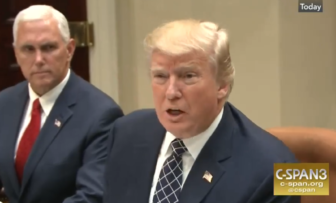 The Republican health care plan would have repealed almost all of the taxes imposed by the Affordable Care Act to help expand Medicaid to poor Americans and provide subsidies to help lower- and middle-income Americans pay for their health insurance premiums.

To try to shore up conservative support, the Senate health care bill was amended to include a provision sponsored by Sen. Ted Cruz, R-Texas, that would allow the sale of bare-boned health care plans, which might not include mental health or maternity care, if a state insurance exchange also offered one that complied with ACA coverage requirements.

“There is room between the Cruz plan and the existing law to negotiate,” Murphy said.

The nation’s insurers, however, have asked McConnell to dump Cruz’s provision.

“It is simply unworkable in any form and would undermine protections for those with pre-existing medical conditions, increase premiums and lead to widespread terminations of coverage for people currently enrolled in the individual market,” a letter to McConnell from America’s Health Insurance Plans and the BlueCross/BlueShield Association said.

Sen. Richard Blumenthal, D-Conn., also said he is willing to work with the GOP.

“The next step is for Republicans and Democrats to sit down and hammer out common-sense steps to reduce drug prices and all health care costs and promote better competition in (state insurance) exchanges,” he said.

He said the cost of premiums could be lowered by rolling back some of the ACA’s regulations on insurers and increasing the subsidies the ACA provides to help people purchase insurance and the “cost-sharing reduction” subsidies that reduce copayments and deductibles for low-income Americans.

“These kinds of steps are within reach,” Blumenthal said.

White House Deputy Press Secretary Sarah Huckabee Sanders would not say whether the administration will continue to fund key cost-sharing subsidies that help stabilize insurance markets or take any other steps that would hurt the ACA.

“I don’t think that the White House has to take any actions for Obamacare to collapse,” Sanders said.

Sen. John McCain, R-Ariz., may have unwittingly helped speed the collapse of the BCRA because he had emergency surgery over the weekend. McCain’s inability to return to Washington prompted McConnell to delay a vote on the legislation and give skittish Senate Republicans more time to decide they opposed the bill.

The Republican bill was crafted by McConnell and a dozen GOP senators, mostly behind closed doors.

On Monday night, McCain urged Senate Republicans to return to “regular order,” that is hold hearings and “receive input from members of both parties, and heed the recommendations of our nation’s governors so that we can produce a bill that finally provides Americans with access to quality and affordable health care.”

Murphy said eventually that can be done, but may be more doable after senators have time to decompress over Congress’s August break.

“This process probably needs a bit of a pause,” Murphy said.