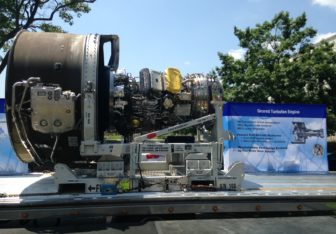 The Connecticut-made “Pure Power” geared turbofan engine, which had been on display at the Paris Air Show, had many admirers.

“This is a product that is made in America that is exported to other countries,” said Rep. John Larson, D-1st District.

Meanwhile, the massive engine shone in the summer sunlight, attracting the attention of several passers by, including one California congressman who joked he wished the engine would power a direct flight from Washington’s Reagan National Airport to San Diego.

Sen. Richard Blumenthal, D-Conn., also showed up to check the engine out.

The unique technology in the Pratt & Whitney engine is a gearing system that allows the fan in front to spin more slowly than the turbine and compressor in the back. That means each part of the engine can operate at optimum speeds, increasing fuel efficiency and producing less noise and exhaust.

For national security reasons, Pratt & Whitney would not be able to display the engine it makes for the Pentagon, the F-135 that powers the F-35 Joint Strike Fighter, or a similar one that will be used in the Air Force’s B-21 long-range strike bomber.

But James Speich, senior marketing manager at Pratt & Whitney, said the geared turbofan engine could join its brothers in the armed services “if something were to occur in the military end that requires a commercial engine right off the shelf.”

Pratt & Whitney President Bob Leduc was among the company officials who traveled from Connecticut to Washington, D.C., to show off the engine in the city’s searing 90-plus-degree heat Wednesday.

“The geared turbofan, with its revolutionary design, is the future of aviation, and is a great example of U.S. manufacturing leadership,” Leduc said.

The company, which has 8,000 backorders for the geared turbofan engine, expects to hire 25,000 additional workers at all of its locations by 2026, “helping to ensure that we meet production targets and maintenance standards, and we will continue to invest in our facilities and supply chain,” a Pratt & Whitney statement said.

“People who build this engine can’t be wrong by a millimeter,” Blumenthal said.

Despite the engine’s apparent popularity – it is used in an number of commercial aircraft – it is facing some headwinds.

But Boeing has filed “dumping” charges against Bombardier at the International Trade Commission and the U.S. Department of Commerce, saying Canadian government subsidies have unfairly brought down the cost of that plane.

Pratt & Whitney also has hit a little turbulence over its F-135 engine that powers the Joint Strike Fighter.

The Pentagon’s recent “Selected Acquisition Report on the F-35’s progress said that from July 2016 to April of this year there were about  $43 million in cost overruns in the F-135 engine program.

The problem stems in large part from the engine maker’s supply chain.

Hardware is “costing more than planned,” according to the report, primarily because the contractor targets aren’t “achievable… due to delays with incorporating enough engineering changes and affordability initiatives to lower the manufacturing costs and the supply chain team being unable to negotiate lower pricing from the supply base.”

The report said there were problems with timely delivery of some parts “due to their complexity” and others “due to quality non-conformances, suppliers yield issues and coating operations delays.”

The pressure to bring engine costs back in line will increase as the Pentagon and Congress are increasing the number of F-35s that will be purchased from Lockheed Martin in this year and the next.

In a statement, Pratt & Whitney said “since we established our War on Cost commitment with the government in 2009, we have reduced the production cost of the F135 engine by more than half. “

The company also said “we continue to focus on implementing engineering design changes and working with our supply chain to further reduce costs, and we expect further cost reduction as the volume from the engine production ramp increases. “

But as far as the $43 million in cost overruns in the F-135 program since last June, and any going forward, Pratt & Whitney’s contract with the Pentagon makes the company responsible for them.