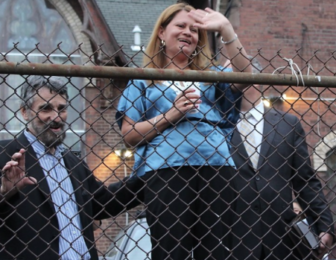 The plan was for Nury Chavarria to stay inside the church Sunday night as hundreds of supporters gathered outside to sing and chant their support for her to remain in the U.S.

The plan changed. As her plans in general seem to change these days.

Chavarria’s original plan was to remain in the U.S., as she has for 24 years since fleeing Guatemala. She has been raising four kids in Norwalk; though undocumented, she was granted annual stays of deportation. But that plan changed: Newly aggressive federal immigration officials ordered her deported back to Guatemala last Thursday.

She changed that plan, too: Instead of boarding a plane, she took refuge in Fair Haven’s Iglesia de Dios Pentecostal, where federal policy forbids agents from coming to grab her, while her lawyers and now elected officials renew efforts to win permission for her to remain here. Instead of being another one of Donald Trump’s deportees, Chavarria has become a symbol of the resistance to the president’s immigration policies: a hard-working housecleaner and single mom who has never gotten in trouble with the law in more than two decades of raising her family here.

As national television outlets beamed her story to the nation, over 200 people Sunday came to a sloping lot on the East Pearl Street church grounds for a vigil a block uphill from the Quinnipiac River. It was one of those defining New Haven moments, demonstrating the city’s commitment to welcoming immigrants.

Technically Chavarria could have attended the vigil and remained on church property. Technically that would have continued to have shielded her from being grabbed by Immigration and Custom Enforcement (ICE) agents.

She and the clergy and immigration reform organizers supporting her decided not to take any chances, not to tempt a confrontation. She would instead listen to the chants and the speeches and the songs from within the walls of the church that has become her temporary home. 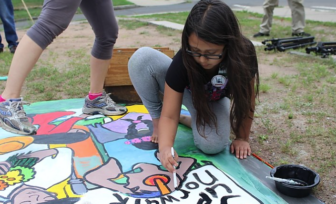 Chavarria’s daughter Hayley works on a mural before the vigil.

That worked for a while. Then temptation drew her outside, briefly. From behind a fence overlooking the lot, flanked by immigrant-rights organizer Kica Matos, Rabbi Herb Brockman, and Iglesia de Dios Pastor Hector Luis Otero, Chavarria watched for a few moments as people gradually noticed her presence. Then she waved to the crowd.

Handed a microphone, she told people how grateful and moved she feels by the outpouring of support. Then she returned inside, and the vigil continued.

New Haven had been planning for months to offer immigrants sanctuary from ICE deportation inside houses of worship. Chavarria is the first so far to seek that sanctuary here. Nationally, 13 immigrants ordered to lave the country have taken refuge in sanctuary churches, according to Kica Matos. Matos, an organizer focused on immigration and race at the national Center for Community Change who lives in Fair Haven, was asked Sunday night why she thinks Chavarria’s case in particular is receiving so much broader attention.

“This case shocked the conscience of most Americans,” Matos responded. “Irrespective of what your political leanings are, decent Americans find what the government did repugnant.”

At the vigil, Pastor Otero and the Rev. Abraham Hernandez offered a prayer for Chavarria to win permission to remain here and resume life with her children: “If anyone deserves a right to stay in this country, it’s Nury Chavarria.”

Vigil participants took turns painting the names of their hometowns on a mural created for Chavarria.

Rabbi Herb Brockman of Temple Mishkan Israel, which has also agreed to serve as a sanctuary congregation (click here for a previous article about that), called Chavarria a hero. 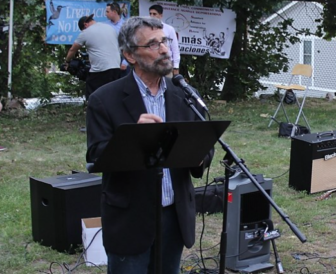 Rabbi Herb Brockman of Temple Mishkan Israel, which has also agreed to serve as a sanctuary congregation

“A woman to stand up for justice should inspire us, for it is our justice as well as it is hers that is at stake. It is our America that is at stake as well as hers. It is the conscience of our nation as well as hers that is under threat. It is the soul of our common religious faiths that is under siege as is hers,” Brockman declared. “For a hero is not someone who chooses their time. It is always foisted on them by circumstances. And then they must decide. She has decided to be with us as much as we have decided to be with her. Her example has brought our community together. Look around. Her example has demonstrated remarkable strength and length…. She may even get to change our laws.”

New Haven Mayor Toni Harp decried the “cruel and inhumane treatment of a Connecticut resident for technical and certainly noncriminal noncompliance with inconsistent, arbitrary federal policy. It is a foreign concept to me that a woman who has lived in Connecticut 24 years, worked in Connecticut, raised a family in Connecticut, must now leave Connecticut — her home, her job and her children — to satisfy discrimination and baseless fear in the hearts of some Americans.” Harp closed by speaking to the woman listening from inside the church walls: “I want you to know, Nury, that New Haven is with you.”

The East L.A. touring band Las Cafeteras was with Nury, too, Sunday night. It was in town to play Cafe Nine. It made a point of stopping first by the vigil on East Pearl Street to induce one final extended round of singing and clapping in the lot — along with some moves.

“If we can’t dance together,” the singer reasoned, “how can we build a city together?” 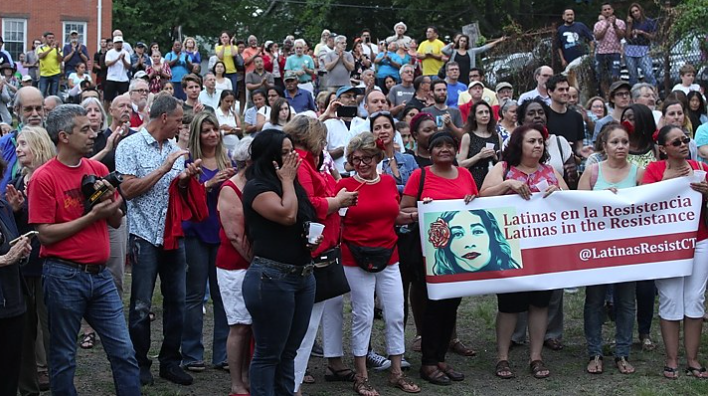 More than 200 people attended the vigil.