GOP quick to define a reticent Wyman as Malloy’s ‘enabler’

Lt. Gov. Nancy Wyman passed on trying to spin reporters Monday night after her tie-breaking vote in the Senate to ratify a state-employees concessions deal that Republicans are certain to exploit as a wedge issue in the 2018 campaigns for governor and General Assembly.

The opportunity was not missed by the Republican Governors Association. It cast her the next morning as “Failed Democrat Governor Dan Malloy’s chief enabler,” a reminder of how the GOP will tie her to the deeply unpopular Malloy should she seek his open seat.

“By signing off on Malloy’s deal with big labor,” the RGA said in an email blast, “Wyman has made clear to the people of Connecticut that a vote for her in 2018 would only bring four more years of Dan Malloy’s failed policies.”

More than three months after Malloy announced he would not run for a third term, Wyman is neither in nor out. Her official position is she will make no final decision until a budget is adopted — something likely to require another tie-breaking vote by Wyman in the Senate, where Republicans and Democrats each hold 18 seats.

Wyman, a former state legislator and state comptroller twice elected as Malloy’s running mate in 2010 and 2014, said any pivotal vote she casts will not merely be an extension of Malloy’s wishes on a budget, either to cast a deciding vote in favor or to block an unsatisfactory version from reaching his desk.

“The governor and I, we’ve talked about it,” Wyman told CT Mirror. “If it’s not equitable to the towns, to people in need, then I’m not voting for the budget.” 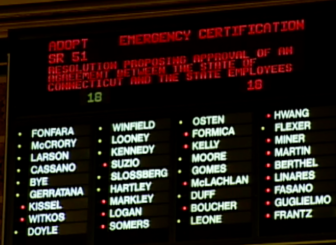 The statement is less dramatic than it sounds. As a practical matter, any budget that comes before the Senate would be the result of a deal struck by Malloy and the Democratic leaders of the Senate, where she presides, and the House, where she served from 1987 to 1995.

Malloy, who courted Wyman as his running mate and credits her presence on the ticket as factors in his winning both a gubernatorial primary and general election in 2010, said he expected that Wyman’s views would be reflected in a final budget deal.

“There is nothing that I could conceive that I’d agree to that she wouldn’t be in agreement with or vice versa,” Malloy said. “Having said that, it’s also important to understand that she is an independent individual and has the right to act accordingly. I would expect nothing less of her.”

Wyman, who voted for the passage of the income tax in 1991 and is generally seen as more liberal than Malloy, said her insistence on an “equitable” budget is not code for an unwillingness to accept spending cuts that she and constituencies important to her will find painful.

“There is going to be pain,” she said.

It is a delicate line.

“I respect Dan Malloy and I know how hard he works,” Wyman said. “But after 51 years of marriage, my husband and I still disagree.”

But those disagreements don’t play out on the 6 o’clock news. And, so far, neither do any she has with Malloy. 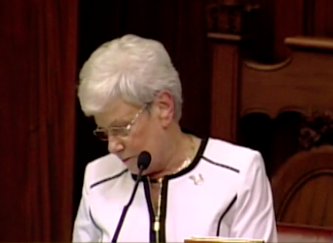 Wyman spoke briefly in the Senate before casting the deciding vote for the concessions. If she thought they were too little or too much, she didn’t say.

“The decisions that were made were very difficult for everybody. I want to thank everybody that did the negotiations,” Wyman said. “I do respect all of the Republicans’ comments today, but I do hope that we will go further, and I do think that this is the right step and the right direction, so I will be voting yay.”

Wyman said she left without further comment to the press, because “it was the night of the Senate” and not time to “focus on one vote.”

Even if it was the last one cast.

The legislation, which is expected to pass the House today, would remove the religious exemption beginning in September, 2022.