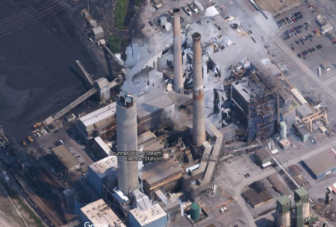 A coal-burning power plant in Pennsylvania

Washington – Gov. Dannel P. Malloy on Friday lauded the U.S. Environmental Agency’s reversal of its decision to delay a new rule that would lower the level of ozone emissions permitted from fossil-fuel burning, such as the exhaust from auto tailpipes and power plant smokestacks.

The new Obama-era rule was scheduled to be implemented on Oct. 1, but EPA Administrator Scott Pruitt decided in June to hold off implementing that rule for about a year to study its impact. A provision in the Clean Air Act allows for the delay of implementation of new regulations if the agency needs to collect more information.

Late Wednesday, Pruitt decided to allow the tougher standards for ozone emissions to be put into place as scheduled.

“This reversal of direction bodes well for the people of Connecticut and for all those fighting for clean air in America,” Malloy said.

In a statement, Pruitt said he decided to work “with the states through the complex designation process.”

Malloy had also pressed Pruitt to implement the tougher standards.

In a letter written to Pruitt in June, Malloy reminded Pruitt of a conversation the men had over the issue at the National Governors Association winter meeting.

“I presented you with the fact that my state is already designated nonattainment for ozone and that we measure the highest levels of ozone in the Northeast,” Malloy wrote. “More than 90 percent of this pollution blows into our state from other places. So in fact, on some days, every power plant and factory in our state could shut down and Connecticut could still exceed ozone (standards).”

Malloy said Connecticut already has stringent ozone restrictions in place, and “remains at a competitive economic disadvantage against states that ignore critical air quality issues in an effort to maintain a low-cost environment for their businesses.”

Ozone is a gas created when chemical emissions from burning fossil fuels are exposed to heat and sunlight.

The resulting smog has been linked to childhood asthma, lower infant birth weights and lung disease.

On Friday, Connecticut Department of Energy and Environmental Protection Commissioner Rob Klee said, “Connecticut continues to suffer the public health and economic consequences of being a downwind state that receives air pollution from states to our west that burn dirtier and cheaper fuels.”

Although it was less strict than manufacturers had feared, some industry leaders criticized the rule as overly burdensome.