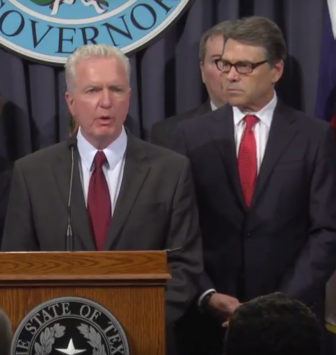 Last week, 65 administration nominees — including four to Health and Human Services — sailed through the Senate confirmation process by unanimous vote without any debate. One candidate left out was Dr. Brett Giroir, a Texas physician, who is the president’s choice for assistant secretary of health.

Now, shedding light on their reservations, Senate Democrats are saying that Giroir’s testimony before the Health, Education, Labor and Pensions Committee left them skeptical that he would support women’s health programs, which they say are under threat. The Democrats are insisting on a roll call vote on the Senate floor — after the Senate reconvenes Sept. 5.

The position for which Giroir is nominated includes oversight of the Office of Population Affairs, which administers Title X grants, and the Office of Adolescent Health, which oversees the Teen Pregnancy Prevention Program. Title X funding goes to clinics for family planning and reproductive health services.

“After carefully reviewing his qualifications, I am unconvinced Dr. Giroir would be willing to stand up to this administration’s ideological attacks on women in a key leadership role at HHS,” Sen. Patty Murray, D-Wash., said in a statement in response to questions from KHN.

Giroir and HHS declined to comment when contacted Wednesday.

President Donald Trump signed legislation in April that allows states to block Title X money from going to Planned Parenthood and other clinics that also perform abortions. The administration’s budget proposal called for a cut of $213.6 million for teen pregnancy prevention programs and research grants that go to more than 80 institutions. Congress has not yet set funding levels for 2018.

Challenged by Murray during a confirmation hearing last week about his views on the administration’s proposals, Giroir’s replies were polite, cooperative — and unrevealing.

For example, when Murray asked Giroir if he believed family planning funds should be made available to all providers (suggesting she was including Planned Parenthood), Giroir affirmed his belief that family planning services are important but said, “If there are restrictions that are handed down to me, I am obliged to follow the law.”

Giroir holds advisory positions in several companies in their development phase. He’s the consultant CEO of ViraCyte, which is working on drugs for organ transplants. He is on the scientific advisory board of NonInvasix, a company developing equipment for neonatal intensive care units; Esperance Pharmaceuticals, whose focus is anti-cancer drugs; and BrainCheck, an app that tests cognitive skills.

Last year, Giroir earned $424,124 from his independent consulting company, Health Science and Biosecurity Partners, according to the financial disclosure statement he submitted after his nomination to the HHS position. He has pledged to cease his consulting work and resign his university and business-related board positions if confirmed.

Adams, Robertson and McCance-Katz all held positions in state health departments. Kadlec was previously the deputy staff director for the Senate Select Committee on Intelligence.

Murray’s reservations about Giroir cap earlier controversies about the backgrounds of other Trump administration appointees to HHS posts.

Charmaine Yoest, the assistant secretary of public affairs, was the former president of Americans United for Life, a group that lobbies for anti-abortion legislation at the state level.

Valerie Huber, who would serve as Giroir’s chief of staff, previously led Ascend, formerly known as the National Abstinence Education Association. It advocates for abstinence-only sex education in schools.

Teresa Manning, who will help oversee Title X grants as the deputy assistant secretary for population affairs, was a lobbyist with the National Right to Life Committee.

None of those three appointments required Senate confirmation.

This story was first published Aug. 10, 2017, by Kaiser Health News (KHN), a national health policy news service. It is an editorially independent program of the Henry J. Kaiser Family Foundation.