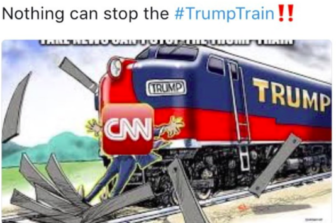 The image that Trump retweeted, then deleted.

President Trump retweeted a cartoon image of a train running over a CNN reporter to his 35.9 million Twitter followers. Kyle Reyes, owner of a self-described “outrageous” Manchester marketing company, questioned in a Facebook video seen more than 37,000 times if the white supremacists in Charlottesville, Va., actually were actors hired by the political left.

One caused agita Tuesday at the White House, even if Trump deleted the Tweet. The other posed a headache for J.R. Romano, chairman of the Connecticut Republican Party, even if it wasn’t his work. Reyes also hosts “Whiskey Patriots,” a web show on which Romano is a regular, sipping whiskey and skewering liberals.

Anyone can have a voice on social media, free to be clever, thoughtful, outrageous and sometimes, as Romano acknowledged Tuesday, just plain stupid.

“I think the biggest problem with the social media and digital media era is, I’m certain in all of our lives, we’ve said things, the first thing that came to our mind, that maybe wasn’t the right or correct thing to say, right? We’ve all been there,” Romano said. “I think the problem with everyone having access to a video camera and an opinion is you can say stupid things.”

Romano simultaneously distanced himself from Reyes’ commentary and insisted it wasn’t his problem.

Rennie posted a brief item about what he called Reyes’ “astonishing video” and noted that Romano and Reyes are fellow Whiskey Patriots. “The video is bizarre on its own,” Rennie wrote. “That these are the thoughts of a video partner of the Republican state chairman is chilling.”

For anyone who might have missed Rennie’s post, the Democratic Party was happy to give it wider exposure in an email blast in which Mike Mandell, the party’s executive director, said,  “It’s time to hold J.R. Romano and his Republican colleagues accountable.”

Mandell also highlighted a Facebook rant by a Republican State Central Committee member and the speaking invitation the party extended to Michelle Malkin, a conservative columnist who defends the internment of Japanese Americans during World War II.

Mandell said Romano’s complaint about guilt by association was odd, given his campaign to tie every Democrat in the General Assembly to Gov. Dannel P. Malloy.

For his part, Reyes apologized for nothing. He said he did not and would not defend the Ku Klux Klan or any Nazi sympathizers — if that’s who really staged the protest in Charlottesville, where a counter-protester was struck and killed by car.

“The whole point that I brought up in this is nothing in this world surprises me any more,” Reyes told CT Mirror.

From a marketing point of view, Reyes said, it made sense for the left to discredit the alt-right by impersonating them. Reyes said he was just sharing those thoughts in a solo video, one that began with him conceding his photographer thought it a mistake.

Reyes acknowledged that questioning the reality of a news event on the web invites comparisons to Alex Jones, whose Infowars web show gave a platform to deniers of the Sandy Hook School shooting massacre.

“Alex Jones is an idiot, and there are lots of idiots out there. I get that. The context isn’t lost on me,” Reyes said.

But Reyes, who says he worked in television news at NBC Connecticut before founding The Silent Partner Marketing, makes his living attracting attention.

“If you’re looking for a team that’s going to subscribe to the ‘yes man’ philosophy, we’re not for you. We’re aggressive. We’re outrageous. We’re contrarian,” is how the firm bills itself on its web site. “We will push the envelope and we will challenge conventional wisdom. But once you see the light, you’ll never look back.”

Reyes said he met Romano at meetings of Grassroots East, an east-of-the-river Republican group, when he was asked to give advice about how to use digital media, He said he often disagrees with Romano, but intends to keep inviting him to continue as a Whiskey Patriot, where a fellow panelist is Carl Higbie, an ex-Navy Seal and Fox News contributor.

Romano did not rule out future appearances. 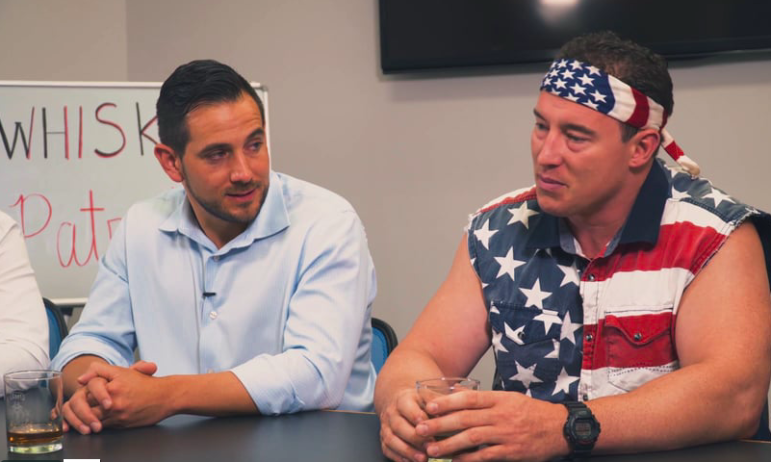 J.R. Romano, left, with Carl Higbie on an episode of Whiskey Patriots