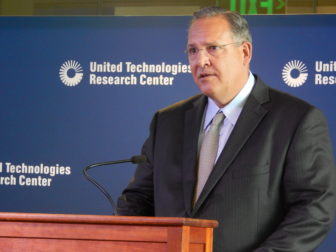 In a statement released on Twitter, Hayes said UTC “strongly supports the goals of each of these advisory committees as a way of ensuring and enhancing America’s economic growth in the decades to come.”

But he also said the events at a white supremacist rally in Charlottesville, Va., and its aftermath forced him to resign from the manufacturing council.

“As the events of last week have unfolded here in the U.S., it is clear that we need to collectively stand together and denounce the politics of hate, intolerance and racism,” Hayes said. “The values that are the cornerstone of our culture: tolerance, diversity, sympathy and trust, must be reaffirmed by our actions every day.”

The head of the parent company of Pratt & Whitney concluded, “Accordingly, I have tendered my resignation from the council effective today.”

UTC’s announcement came minutes after Trump tweeted, “Rather than putting pressure on the businesspeople of the Manufacturing Council & Strategy & Policy Forum, I am ending both. Thank you all!”

Trump announced the breakup of the advisory councils after 3M Co.’s Inge Thulin became the latest of several chief executives to leave the American Manufacturing Council.

On Tuesday, Trump slammed the first CEO’s to leave the manufacturing panel, who included Merck’s Ken Frazier, as “grandstanders.”

“For every CEO that drops out of the Manufacturing Council, I have many to take their place,” Trump wrote on Twitter. “Grandstanders should not have gone on. JOBS!”

Rather than putting pressure on the businesspeople of the Manufacturing Council & Strategy & Policy Forum, I am ending both. Thank you all!

The Strategic and Policy Forum, another group of business people advising the president, was considering disbanding prior to Trump’s announcement. Several members spoke via conference call Wednesday morning to discuss the panel’s future.

In a joint statement, members of the Strategic and Policy Forum appeared to cast the decision to disband as a mutual one.

“As our members have expressed individually over the past several days, intolerance, racism and violence have absolutely no place in this country and are an affront to core American values,” the statement said. “We believe the debate over Forum participation has become a distraction from our well-intentioned and sincere desire to aid vital policy discussions on how to improve the lives of everyday Americans. As such, the President and we are disbanding the Forum.”

It’s not likely the events in Charlottesville, and the president’s controversial reaction to them, will cause a total rift between members of the U.S. business community and the Trump White House.

On Monday, General Dynamics lobbyist Robert Helm was among a small group of corporate guests of the president when he signed an executive order directing U.S. trade officials to determine whether China should be investigated “for unreasonable or discriminatory policies that may harm American (intellectual property) rights, innovation, or technological development.”