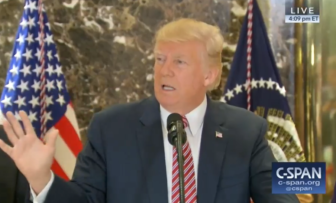 President Donald Trump answers questions Tuesday from reporters on the violence that occurred at a rally in Charlottesville, Va., the previous weekend.

Connecticut Republicans unequivocally denounce the torch-wielding white supremacists and neo-Nazis who marched in Charlottesville, Va., while their criticism of President Trump’s insistence he saw “blame on both sides” of the violent protests and counter-protests was more muted.

“There’s no question I think the president could have been more articulate,” said J.R. Romano, the state Republican chairman. “I think this is a very delicate topic. When you are talking about these entities that believe in violence, believe in racism and believe in bigotry, those are wrong. Those are not American values. Those aren’t our values.”

But like the president, Romano drew a rough equivalency between the actions of those at the “Unite the Right” rally who displayed swastikas and chanted, “Jews will not replace us,” with counter-protesters, some of whom were affiliated with the sometimes-violent “antifa” or anti-fascists.

“All these neo-Nazis are assholes,” Romano told CT Mirror. “Where Trump missed the mark, and the only way I can explain this, in the grand scheme of things, this white supremacy Nazism, on a scale of evil, that’s a 10. But the antifa guys are like at an 8.”

But in a WTNH television interview, Romano compared the hate groups to Black Lives Matter, a comparison Democrats called off base.

“There is no comparison between peaceful protesters seeking racial justice and violent, murderous racists. This insinuation is the latest in a long line of unacceptable actions from Mr. Romano,” said Mike Mandell, the executive director of the state Democratic Party.

Mandell said Trump wasn’t inarticulate: He said what he meant and meant what he said.

“Republican leaders in Connecticut and across the nation are complicit when they mince words or search for false equivalencies,” said Mayor Toni Harp of New Haven, a Democrat.

Several of the Republicans who are either running for governor or exploring a run denounced the white supremacists.

Unlike the president, some candidates saw nothing legitimate about a march ostensibly organized to object to the renaming of parks that honored two Confederate generals, Robert E. Lee and Stonewall Jackson, as Emancipation Park and Justice Park.

“These protesters came from hundreds of miles away to object to the city’s well-reasoned decision to move past the Civil War,” state Rep. Prasad Srinivasan, R-Glastonbury, said in a statement issued Monday. “Make no mistake: this protest was about fear and intimidation, not free expression.”

Srinivasan, who could not be reached Wednesday, offered a view contrary to Trump’s, without mentioning the president by name. The same was true of state Sen. Toni Boucher, R-Wilton, an exploratory candidate. She issued a statement denouncing the marchers, while saying nothing of the president.

In an interview Wednesday, she said she was too focused on the state budget impasse to track the president’s statements.

”I have not been focused federally,” said Boucher, an exploratory candidate. “I will not be diverted from my focus on the problems of the state of Connecticut, no matter what political forces try to get you to frame it that way.”

Of the president, she said, “Unfortunately, I think we are talking about an individual who may not take advice.”

House Minority Leader Themis Klarides, who is weighing a run for governor and was a Trump delegate to the Republican National Convention, could not be reached for comment.

Shelton Mayor Mark Lauretti, a declared candidate for governor, said, “I haven’t really focused a lot of time on President Trump. I think Connecticut has its own issues. Connecticut has to get its own house in order before we worry about what’s going on in parts far away.”

Overall, he said, he sees America as a place that’s grown more tolerant in recent decades, not less.

Trumbull First Selectman Tim Herbst said he “can’t control what the president says,” but he faulted Trump for failing to simply and directly condemn the hate groups.

“I don’t care if you are the president or any other Republican: There is a need to be absolutely clear in the condemnation of neo-Nazis, the KKK or any other group that promotes their ideology through hate or bigotry,” Herbst said.

On Sunday, Dave Walker, a former U.S. comptroller general running for governor, tweeted, “We must reject all radicals who advocate violence.” In an interview Wednesday, he, too, faulted Trump.

“He should have been much more clear and direct in condemning the white supremacists and neo-Nazis,” Walker said.

But Walker said Republicans are wary of allowing Connecticut Democrats to use the president to distract voters here from the fiscal and economic issues that should be central to the 2018 election for governor.

“The Democrats would like nothing better than to make the race about Trump than about the serious problems we face in Connecticut and what do we need to do to fix them,” Walker said. “So, it’s a diversionary tactic.”