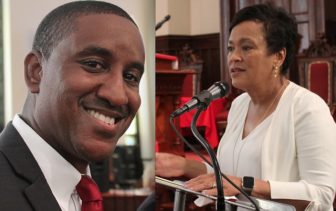 Marcus Paca promised that if he becomes mayor, he will fight gentrification, while Mayor Toni Harp argued that the burst of market-rate housing in town doesn’t constitute gentrification.

Those differences between the two Democratic mayoral candidates emerged Sunday afternoon at their first debate, held before a full house in the sanctuary of Varick Memorial AME Zion Church on Dixwell Avenue.

The event was billed as a “forum,” not a “debate.” But a debate it turned out to be, from the moment the two Democrats began fielding questions from a panel of three local ministers and passionately responded to each other’s positions in a fast-paced, issues-focused back and forth. Two-term incumbent Harp faces Paca in a Sept. 12 party primary.

The debate went beyond the campaign’s familiar overall divide over whether New Haven is on a roll with the right strategies in place to meet fiscal, educational and public-safety challenges (Harp’s position) or whether the city needs fresh blood and fresh ideas to reverse a downward spiral (Paca’s). In Sunday’s debate, the two offered strikingly different takes, and prescriptions, for dealing with housing, immigration, and white supremacists.

Beginning with whether New Haven is experiencing “gentrification.”

Paca called gentrification “a major problem” in town. He promised to “make sure our people, especially black and brown people, are not priced out” of living in New Haven. 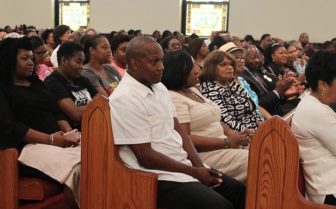 Paca said he has heard repeatedly from voters about unaffordable rising rents. Harp has spoken on the campaign trail about how 3,000 market-rate apartments have been built or will soon be built and open for rental since she became mayor. If elected, Paca said at Sunday’s debate, “I’m not going to focus on high-priced … market-rate rents for people who come into our city to work.” He promised instead to work with nonprofits to build more low-income housing.

Harp responded that “gentrification” refers to landlords pushing out poorer renters from existing apartments to make way for more expensive units for wealthier people. That hasn’t happened here, she said.

The major high-end projects recently built or planned in town — such as the Novella on Howe Street, the Corsair on State Street, the Winchester Lofts on Winchester Avenue, several high-end developments at Crown and College, a 140-apartment mixed-use complex planned for 11.6 acres in the Hill — all arose on vacant property. (One pending exception: the remaking of the Hotel Duncan.)

Critics argue that those new upscale developments end up raising everyone’s rents in town and pricing out working families. Harp argued Sunday that she expects that rents will drop in some older buildings when tenants leave them for the newer upscale complexes. Proponents also argue that the new projects build the city’s tax base, potentially providing more money for services and/or tax relief, and bring new customers for local businesses. Harp said Sunday that her administration has been working with the housing authority and other builders on “workforce housing” development, including ones on Winthrop Avenue and near Science Park; and on preserving existing subsidized housing, such as 300 Section 8 units to be included in plans to rebuild the soon-to-be razed Church Street South into a 900 to 1,000-unit complex.

Another sharp difference emerged when the Rev. Brian Bellamy of Friendship Baptist Church asked the candidates how they plan to react if the Trump administration makes good on a threat to withhold funding from “sanctuary cities” that don’t help federal agents round up undocumented immigrants. 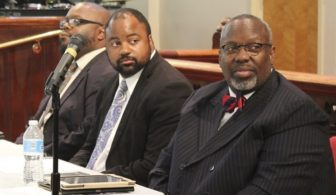 Mayor Harp vowed to continue New Haven’s immigrant-friendly policies, including not having cops ask people about their citizenship status and supporting churches that offer sanctuary to undocumented immigrants ordered to leave the country. Harp has spoken out repeatedly at immigration-reform rallies in support of New Haven’s sanctuary city status and against the Trump administration’s immigration policy.

“When we start letting people take our neighbors away, it starts with people we may consider the other. But one day they will come for us.
We only have to look at what happened in Germany to understand what happened. It is in our own interest to take care of our neighbors and be neighborly,” Harp said.

“The Trump administration started out saying that every single grant would be in jeopardy if you were a sanctuary city. Well, as they learned how government worked, they learned they couldn’t do that, and they rolled it back. They’re now looking at Department of Justice grants and Homeland Security grants. They are also allowing cities to apply for them. We are applying. Like Chicago, if we apply and get the grant, we are not signing on to any of the nonsense they have in those grants.

“We are chartered by the state. We are a state-enabled police department. And the federal government has no business in our work unless we ask them. And we won’t be asking them in this case.”

Paca, on the other hand, said he wouldn’t so readily allow federal grants to pass the city by.

“I believe in sanctuary cities. But I also believe in the diligence of city government,” he began. “I believe that every single leader in our city needs to be cognizant for how our actions and potential actions affect the rest of the citizens in our city.

“That being said, to trivialize that DOJ money might be lost I think is wrong. I think we should be looking at DOJ money as a primary source of funding of our police, especially in light that the police department is already looking at a $5 million deficit this year. I think we have to be more cognizant and do our diligence when it comes to working with the Trump administration.

“I want to look at the realities on the ground,” Paca concluded. “We are a sanctuary state. We are receiving help and funding from our governor. What happens if a Republican governor comes into play? How will that change?”

After the debate, Paca was asked if he would specifically continue the city’s sanctuary policies if that meant losing a DOJ grant. “That’s a decision I want to make in real time,” when in office, he responded.

Paca also took Harp to task for the city’s response to the July 8 event on the Green involving the right-wing group the Proud Boys. The Boys drew a crowd of 150 counterdemonstrators, almost all of whom were New Haveners determined to remain nonviolent — but two of whom included out-of-staters who attacked the right-wingers.

Police, who ended up making four arrests (all of counterdemonstrators), said they were caught off-guard by the event because of allegedly misleading social media postings making the Proud Boys sound more extreme than they are.

In light of last week’s fatal violence at a white supremacist rally in Charlottesville, Va., panelist the Rev. Stephen Cousin asked the candidates how they plan to confront future white supremacist demonstrations here in New Haven.

Harp responded that groups have a First Amendment right to rally, but they must have permits, and they must not be armed. She spoke of training the police better in crowd control and seeking federal dollars for more equipment. She also spoke of the need to scan social media “and hopefully social media gets it right.” Then she echoed an argument local police officials have offered: that part of the problem on July 8 was that social media postings inaccurately referred to the Proud Boys as “white supremacists.”

Paca blasted both that argument and the Harp administration’s handling of the event.

“Are you kidding me?” he declared. “The Proud Boys are a white supremacist group.” (Click here for a story exploring the New Haven police’s argument that the group does not espouse white supremacy.)

Paca also criticized the fact that Mayor Harp said she had not had advance notice of the rally, while the police chief said he did.

Paca said he knew about the rally, and showed up. He said the mayor should show up at such events.

“We need a hands-on mayor, someone who is not afraid” to confront white supremacists and tell them that “hate is not allowed in our city. I would have stood out there and made it very clear to the white supremacists who were spewing hate that they were not welcome, whether or not they have a permit.”

Organizers invited the two GOP candidates in those races, Board of Ed hopeful Kate Adams and probate hopeful Melissa Papantones. Neither showed up.

Read more of this story, including its coverage of board of education and probate judge races.