To some in Connecticut, Trump can do no wrong 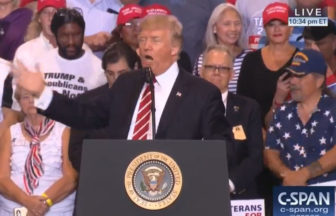 The president delivering his speech in Phoenix.

At a boisterous rally in Phoenix late Tuesday, President Donald Trump gave a speech to hundreds of loyal supporters whose faith in the president is unshaken by recent criticism over how he handled the violence in Charlottesville, Va. and other controversies.

There are plenty of them in Connecticut, too.

In his unscripted and angry speech Tuesday, Trump defended his reaction to the violence at the white supremacist rally that claimed a life of a counter-protester. He blamed the media, not his comments after the incident, for deepening divisions in the country.

Despite low and declining job approval numbers and a series of reversals and controversies, Trump can count on a significant number of loyal supporters who are shaking up conventional politics in every state, including Connecticut.

They like the president’s tough stance on immigration, and promises to bring back jobs lost through corporate outsourcing. But perhaps more importantly, Trump supporters view the president as an antidote to what they view is corruption in mainstream, Washington D.C. politics.

Bryan Pataky of Bridgeport, is among them.

Pataky, owner of a bail bonds company,  said he doesn’t know if Trump “is correct 100 percent of the time,” but supports the president’s agenda – and his outsider status.

“I was so amazed that he was saying what I felt has been true with D.C. politicians,” Pataky said.

The loyalty of Trump supporters is a phenomenon that is bad news for conventional party politics, said Yascha Mounk, a lecturer on political theory at Harvard University.

Mounk said partisanship in the United States is dangerously deep. “Partisanship has always been part of our matrix,” Mounk said. “But now it is much more so.”

He said it’s become a part of a person’s identity, shaping an individual’s world view so much that influences even what type of movie a person will go to see.

He also said that this type of “tribalism” exists on both sides of the political spectrum, but has increased more on the right than on the left after Trump’s election. “Republicans have moved farther to the right, and Democrats to the left, but not as much so,” Mounk said.

Last week, a national survey of Trump supporters by Monmouth University in New Jersey indicated 61 percent said they could not “think of anything that Trump could do, or fail to do, in his term as president that would make (them) disapprove of the job he is doing.”

To Trump supporter Dominic Rapini, who is challenging Sen. Chris Murphy, D-Conn., for Senate, the president’s controversial comments in the aftermath of the violence at a white supremacist rally in Charlottesville, Va., were “a disaster.”

“He could have done better,” said Rapini, a businessman from Branford.  “The press conference at Trump Tower never should have happened. He picked the wrong battle at the wrong time.”

In that press conference, Trump said, “I think there is blame on both sides” for the violence and that there were “very fine people” on both sides.

Rapini, however, said Trump’s mishandling of the situation did not shake his support for the president.

“If the president deviates from his agenda, that would shake me,” Rapini said.

He said Trump won the support of so many because “we wanted an outsider.”

“Insiders were not getting it done,” Rapini said. “But it may not be pretty at times.”

Winning nearly 41 percent of the vote in Connecticut, Trump did better in the state than any Republican presidential candidate since George H.W. Bush in 1988.

Some of those voters pulled the lever for Trump only because he was the GOP candidate. But others are true loyalists.  The true “teflon-coated” presidency may not be that of Ronald Reagan, but of Donald Trump.

Politico says that at least one-third of GOP primary voters identify themselves as “Trump Republicans” (as opposed to “tea party Republicans” or “mainstream Republicans”) in state after state, according to internal polling conducted by a Republican group, with that number reaching 40 percent in some states.

She calls herself a “right nationalist” and decries the “white bashing” she says “is a result of eight years of the Obama administration.”

She said she is “not sympathetic to anyone who got hurt in Charlottesville, except for the two cops who were doing their jobs.” A counterprotester, Heather Heyer, was killed and 19 others were injured when a member of the white supremacist rally ran his car into the crowd.

To Hopkins-Cavanaugh, Trump was right to condemn violence “on both sides.” Although she ran for Congress as a Republican, she has little regard for the national Republicans who condemned the president for his equivalency and his defense of confederate statues.

“There is no such thing as a Republican in D.C. anymore,” Hopkins-Cavanaugh said.

Republican officials and political candidates were either silent of muted in their remarks about Trump’s comments about Charlottesville, even as they condemned neo-Nazi violence and the white supremacist movement.

Ron Schurin, a political science professor at the University of Connecticut, said the loyalty  of Trump supporters may be the reason Trump was not faulted.

“They are afraid of the activists who come out in the primaries,” Schurin said. “Leading Republicans who might be looking to their political futures are afraid of alienating Trump supporters in a statewide primary.”

That’s especially true since Republicans in Connecticut are “doing better at the local level,” in local contests and races for the general assembly and have a good chance at winning the governor’s seat next year, Schurin said.

Scott McLean, chair of the political science department at Quinnipiac University, said there was another time when Trump’s behavior was criticized by Connecticut Republicans, but Trump was not condemned for it.

That was last summer, when Trump’s crude remarks about women were revealed in leaked Access Hollywood tapes, Mc Lean said.

“Connecticut Republicans only condemned the remarks, not Trump himself,” McLean said.

McLean said Connecticut Republicans are keen to “avoid breaking into pro-Trump and anti-Trump factions” to avoid weakening the party.

Mounk said Americans can shrug off bad behavior, because they are becoming more “tribal” in their politics and more closely following cues from their political leaders.

He said Republicans once had a very bad opinion of Russia.

“But now that Trump has repeatedly defended Russia, Republican views of Russia have improved,” Mounk said.