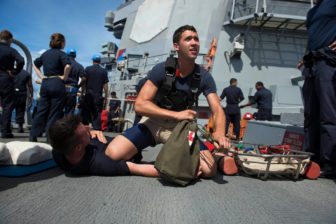 A U..S. Navy image of Dustin Doyon during an exercise.

Washington – The Navy on Friday announced that it has recovered the remains of Dustin Doyon of Suffield, the second confirmed casualty from a collision on Monday between the USS John McCain and a merchant ship in the waters near Singapore.

The Navy said more divers and equipment arrived overnight to continue search and recovery operations for eight missing sailors inside the flooded compartment of the ship.

The first casualty of the collision was reported Thursday, when the Navy recovered the remains of  22-year-old Electronics Technician 3rd Class Kenneth Aaron Smith from New Jersey.

Doyon, 26, was also an Electronics Technician 3rd Class, one of the sailors responsible for a ship’s electronic equipment, radios, computer systems and long-range radar systems.

The USS John McCain accident was the fourth involving a U.S. warship deployed by the Pacific-based 7th Fleet this year  and the second fatal collision.

That has prompted the U.S. Navy to dismiss Vice Adm. Joseph Aucoin as commander of the 7th Fleet on Wednesday. It also prompted the Navy to order a rare, one-day operational pause.

The McCain suffered a steering failure as the warship was beginning its approach into the Strait of Malacca, and it’s unclear why the crew couldn’t use the ship’s backup steering systems to maintain control.

Doyon, a 2009 graduate of Cathedral High School in Springfield, Mass. , is the second sailor from Connecticut involved in recent Navy mishaps.

Sonar Technician 3rd Class Ngoc “Tan” Truong Huynh, 25, of Watertown, was one of seven sailors who died in a June 17 collision off the coast of Japan between the USS Fitzgerald and a container ship .

Doyon’s Facebook page shows he was an avid runner and hiker who loved the outdoors.

Doyon’s grieving family in Suffield released a statement following the announcement of his death: “On behalf of the entire Doyon family, we want to thank all those who have extended their support and prayers,” the family said. “Dustin was a wonderful son, big brother, and sailor. He truly loved his family, the Navy and his shipmates. We are incredibly proud of him and his service to our country. We will miss him immensely and we are so very thankful for the 26 wonderful years we had together.”

A photo of the USS McCain, its side stove in, released by the Malaysian military.

The collisions of  the USS John McCain and the USS Fitgerald are under investigation by the Navy.

They will also face scrutiny from Congress when lawmakers return from their summer break in September.

The seapower panel of the Armed Services Committee has scheduled a hearing on Sept. 7 to examing the spate of Navy accidents titled  “Navy Readiness – Underlying Problems Associated with the USS Fitzgerald and USS John McCain.”

Courtney said “the Doyon family’s tragic loss of their beloved son Dustin who was ably serving in our nation’s defense is a loss for every American.”

“His decision to volunteer to join the Navy, and put himself in harm’s way for his country showed his patriotism and caring for others, which we should all revere and honor,” he said.

Sen. Richard Blumenthal, D-Conn., a member of the Senate Armed Services Committee, said he would also seek a hearing on the Navy mishaps in that panel “to investigate and correct the serious deficiencies that contributed to these collisions.”