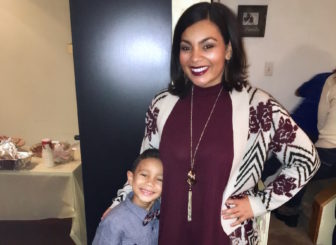 Adrianna Bigard of Hamden and her son Carter, who benefits from the Children’s Health Insurance Program. The program’s future is uncertain.

Washington – When Congress returns for its break next week it will decide whether to renew a health care program that covers 17,000 Connecticut children under 19. If it doesn’t, Connecticut will be among the first states to feel the impact.

The Children’s Health Insurance Program, known as CHIP, is funded largely through federal dollars, with a smaller contribution – 12 percent — by the state. It covers children whose families earn too much money to qualify for Medicaid, providing health care for children for families of four earning up to $79,458 a year.

But authorization for federal funding for the CHIP program, or HUSKY B as it’s known in Connecticut, is set to expire at the end of September, a month in which Congress will be grappling with other huge issues, including raising the national debt limit and approval of a federal budget and a massive disaster relief bill to help victims of Hurricane Harvey.

Efforts to renew the CHIP program, which usually has bipartisan support, also could get entangled in another attempt to repeal and replace the Affordable Care Act,

Sen. John Cornyn, R-Texas, said he hoped CHIP legislation could help Congress break out of its “stalemate” on an ACA repeal.

“I think that presents an opportunity, the next best opportunity,” said Cornyn of the CHIP bill. He’s a member of the Senate Finance Committee, which has the job of crafting the legislation.

The program was last reauthorized by Congress in 2015 for two years. The longer Congress waits to renew the program, the more likely states like Connecticut will have to impose enrollment slowdowns or even cancel coverage.

According to the Medicaid and CHIP Payment and Access Commission, Connecticut will be among the first states to run out of money. Leftover funds from the last allocation of federal CHIP dollars will run out at the end of December, said the Connecticut Department of Social Services. Other states say they can stretch their leftover funds until March of 2018.

“If CHIP funding is not reauthorized, the impact on the state budget will be dire,” said Connecticut Voices for Children. “Given the ongoing state budget crisis, there are few options for coping with any loss of federal contributions to the HUSKY program.”

Connecticut Voices also said that, even if Congress decides to extend the CHIP program, it may cut back the program to pre-2009 levels, which would mean Connecticut would lose at least $18 million a year in federal funding. The Affordable Care Act increased funding for the program, allowing more children to be eligible for HUSKY B.

“Another option would be for Congress to provide only a brief extension,” Connecticut Voices said. “Either of these options will force Connecticut to suspend or do away with health services for tens of thousands of children. “

Connecticut received about $37 million from the federal government in CHIP dollars to run the HUSKY B program in 2017is .

To Adrianna Bigard, a single mother in Hamden, HUSKY B has been a lifesaver.

Bigard, 31, is covered through health insurance from her employer. She receives no public assistance. But several years ago Bigard enrolled her 6-year-old son Carter in HUSKY B. She said she did that because covering him under her employer-based plan would quadruple her monthly premiums.

“If this happens, once all benefits, taxes, etcetera are paid, I will not have enough money left in my check to pay my rent,” Bigard said.

Proponents of the CHIP program say it has boosted the number of immunizations and sharply increased access for preventive care and weight counseling and nutritional programs for children. The Connecticut Department of Social Services said the program increased well-child visits for babies in the first 15 months of life by more than 5 percent and cervical cancer screenings for adolescent females by more than 24 percent.

Established in 1997, the CHIP program is run in Connecticut as HUSKY B in two stages.

Band 1 covers families who earn 201 to 254 percent of the federal poverty level, or up to $62,484 for a family of four. More than 11,000 Connecticut children receive health care coverage under this plan.

Those enrolled in Band 2 must pay a small monthly premium, $30 for one child and $50 for two or more children. But those in HUSKY Band 1 do not have to pay anything for their coverage.

“On the 20th-anniversary year of CHIP being signed into law by President Clinton, it is absolutely essential that Congress does the right thing and continues federal support for this vital program,” said Connecticut Department of Social Services Commissioner Roderick L. Bremby. “We are working with Governor Malloy, Lieutenant Governor Wyman and our Congressional delegation to push for full reauthorization and funding for CHIP. The alternative would hurt children and families and undercut our progress in lowering the uninsured rate in Connecticut and the nation.”