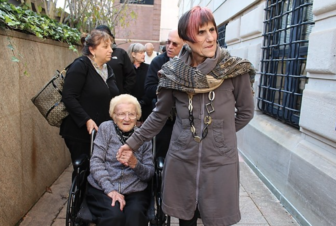 It’s not by accident that Luisa DeLauro made it well past her 100th birthday.

She was both a pioneer in the emergence of women as a force in local politics and a reminder of the Democratic Party’s survival-minded working-class past.

DeLauro, who died Saturday evening at the age of 103, succeeded her husband Ted as Wooster Square’s representative on the Board of Aldermen (as it was then called) in 1965, back when politics was largely a man’s game. She remained in that seat for 35 years, serving longer than any other alder, male or female, in New Haven history.

Luisa DeLauro was born on Dec. 24, 1913, the third of six children of Cesare and Luisa Canestri. She grew up in Wooster Square; she operated a sewing machine in a neighborhood sweatshop. She got involved in local politics along with her husband. And early on, she championed the role of women.

Daughter Rosa DeLauro — her pride and joy, who has served as New Haven’s U.S. congresswoman for 27 years and counting — often quotes a 1933 article her mom wrote in The Renaissance, the bi-monthly publication of the old 10th Ward’s “Young Men’s Democratic Club.” “Come on, girls,” the article concluded, “let’s make ourselves heard.”

State Rep. Pat Dillon, who served with DeLauro on the Board of Aldermen in the early 1980s, Sunday remembered her as “a pioneer, a mentor and friend.”

“She was kind, but fiercely protective of her constituents, so that when the men tried to cut her out, she always stood her ground,” Dillon recalled.

“And fearless. She once blew up the budget over the Cherry Blossom Festival” — an annual Wooster Square Park event that she helped preserve — ‘because the mayor had underfunded it.”

“Every woman in New Haven politics,” former Mayor John DeStefano observed Sunday, “walks down a road trail blazed by Luisa DeLauro. She fought for and got a seat for women at the political table in our city.”

Toni Harp — New Haven’s first female mayor, and one of four women who won first-term seats on the Board of Aldermen in 1987 — called her former colleague “an icon and a role model for women who desired to serve their community through elected office.”

At nearly annual tributes in recent years, politicos inevitably recalled how DeLauro would usher visiting national candidates like the Clintons through her neighborhood, how she’d climb tenement steps in three-inch heels, how she fought urban renewal bulldozers in her neighborhood and got those cherry trees planted. (Click here to read about Luisa DeLauro’s 100th birthday celebration.)

They called Luisa DeLauro the “Mayor of Wooster Square.” A streetcorner was named after her. And in 2011, a “family table” sculpture was installed in her beloved Wooster Square Park. The program for the installation event explained the idea behind tribute: “The DeLauro family table became a makeshift social service center where neighbors often dropped in unannounced and sat with Ted and Luisa to discuss problems with Social Security, Medicare, housing, immigration rights, citizenship applications, and employment.” DeLauro and her husband helped Italian-American immigrants assimilate in New Haven. 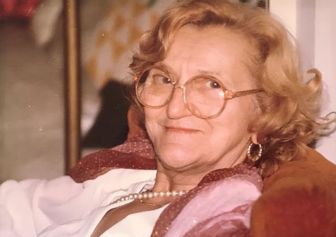 DeLauro served Wooster Square over the course of a half-century of great transition: from a largely Catholic Italian-American working-class to a pricey historic area that has retained its Italian-American identity while becoming home to people of a wide variety of ethnic, racial and religious backgrounds.

In a release issued Sunday, Rosa DeLauro stated that her mother “understood that politics was an avenue for change — a way to help people who were struggling. It is truly the blessing of a lifetime to have been able to follow in her footsteps … All of my actions are guided by her love, encouragement and dedication.”

Her son-in-law drew on her inspiration in helping a Democrat regain the White House in 1992 — by appealing to white ethnic working-class voters who had abandoned the party to become “Reagan Democrats.”

The son-in-law, Stanley Greenberg, served as a pollster and a top adviser to President Bill Clinton that year. He conducted influential focus groups and studies of the “Reagan Democrat” vote. When he subsequently wrote a book about the experience, called Middle Class Dreams, he dedicated it to Luisa DeLauro.

Greenberg said in an interview at the time with the New Haven Advocate that Luisa DeLauro symbolized the political tradition he wanted his party to recapture, an approach that solidified the Democrats’ control of the national agenda in the mid-20th century. Working-class immigrants in urban neighborhoods like Wooster Square became the party’s bedrock back then with an economics-focused agenda that called for building prosperity by starting with the people at the bottom and in the middle of the economic order, not the top. Their representatives from urban machines, like Luisa and Ted DeLauro, lived among them, had a common touch, saw government as a positive tool to provide jobs, good education, and social security.

And they didn’t give up.

The change has led to an uptick in identified cases, according to the DOC website.