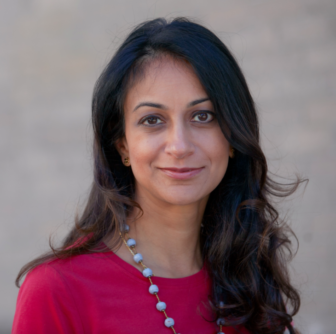 Dita Bhargava began Tuesday to explore whether there is a place in the wide-open race for governor of Connecticut in 2018 for a Democratic woman who is a feminist and an ethnic minority with a Canadian upbringing, a Wall Street pedigree, a Greenwich address and pro-business inclinations.

Bhargava, 45, a former senior trader and portfolio manager who opposed tax increases and called for “a business-friendly ecosystem,” as well as supporting progressive policies such as paid sick days during an unsuccessful run last year for the General Assembly in a solidly Republican district, filed papers late Monday to open an exploratory committee.

“Clearly the status quo is not working. We can’t simply afford do the things the same way we’ve been doing,” she said in an interview Tuesday. “Our state is in trouble.”

From January until August, she was the vice chair of the state Democratic Party, a position that put her in contact with party activists. She was a visitor at the Democratic National Convention to watch the party nominate Hillary Clinton, a woman she financially supported for president in 2008 and again in 2016.

But it was Barack Obama she invoked in a slick, slightly sassy introductory video produced by a leading political consultant that talked about Bhargava’s seeking her own path, whether it was taking up drums as a girl or studying engineering and computer coding as a college student, then establishing herself in the hyper-male world of trading and finance on Wall Street.

“A lot of people thought Barack Obama couldn’t be elected president, and some people might think the same thing about my chances of  being  governor,” she says in the video. “But a challenge has never scared me, whether being the only girl in the coding class, on a trading floor or playing the drums. So don’t write me off until you  see what I can do…”

In the video, she praises her mother, an immigrant from India, for going against cultural norms in the 1970s to leave a bad marriage and raise three daughters as a single parent of limited means: “She had so much strength to stand up for herself and leave after everyone told her she couldn’t.”

The video was produced by Mark Putnam, a media adviser to the Obama campaigns of 2008 and 2012. He has a reputation for deftly blending the personal and political — and working for Democrats in difficult races. In a 2014 profile, the New York Times said, “Mr. Putnam has emerged as a leading image guru in the lucrative world of political advertising.”

His hiring is bound to convey a sense of seriousness to party insiders.

Bhargava seems intent on mapping a path that could prove challenging in a Democratic convention and primary season, when liberals tend to dominate. She will be asked how Connecticut can maintain progressive social policies without a more progressive tax structure that demands more of the wealthy.

Her answer Tuesday was that Connecticut needs a diverse tax base, and it currently is too reliant on 1 percent of taxpayers, a volatile tax structure that has not produced projected revenues after previous increases. It is the same conclusion reached by some liberals, such as Senate President Pro Tem Martin M. Looney, D-New Haven, but one that will be challenged in a party whose activists lean left.

“People can leave, and companies can leave, then what do we do?” Bhargava said. Connecticut must bring in more revenue through economic growth, she said.

As an exploratory candidate, Bhargava can raise and spend money, while retaining flexibility to shift to another race. In her filing, Bhargava left open the option of running for state treasurer, which will limit her ability under state campaign finance laws to accept donations from people employed in the financial services industry.

She enters a Democratic field with no clear front-runners. Middletown Mayor Dan Drew is a declared candidate who is positioning himself on the left, promising to seek higher taxes on the wealthy and criticizing Gov. Dannel P. Malloy, a Democrat not seeking a third term, for demanding and obtaining concessions from state-employees.

Bhargava offered mild criticism of the concession deal, expressing concern that it extended the basic level of retirement and health benefits until 2027.

Bridgeport Mayor Joseph Ganim, former state Sen. Jonathan Harris and former federal prosector Chris Mattei are the other Democrats raising money as exploratory candidates. Others have formed committees, but have yet to raise significant funds or be seen as serious contenders.

Bhargava was born and raised in Canada, moving to the U.S. in 1995 after graduating with an electrical engineering degree from McMaster University in Hamilton, Ontario. She became a U.S. citizen in 2004.

On Sept. 11, 2001, Bhargava lived in an apartment in lower Manhattan that faced the World Trade Center. She stayed for months with a sister after the terrorist attack left her neighborhood uninhabitable.

She moved to Connecticut in 2007 after her marriage to a co-worker, Dan Pelletier, the son of two New York City public school teachers, who has since left finance to work on a software startup. They live in the Cos Cob section of Greenwich and are the parents of a 7-year-old son and 8 1/2-year-old daughter.

Bhargava’s resume includes jobs with Citigroup, Credit Suisse, Bear Stearns, Dillon Read Capital Management and Citadel Investment Group. Her last position in finance was with RBS in Stamford, which she left in December 2015.

She has since co-founded the Parity Partnership of Connecticut, which she describes as “a nonpartisan organization dedicated to educating the public about gender inequality whose mission includes advocating for the availability of paid family leave, improving workplace culture, and developing strategies for businesses and organizations to create a more equitable environment for their employees.”

Bhargava is a Clinton Foundation ambassador, a status given to substantial financial supporters of the charity.