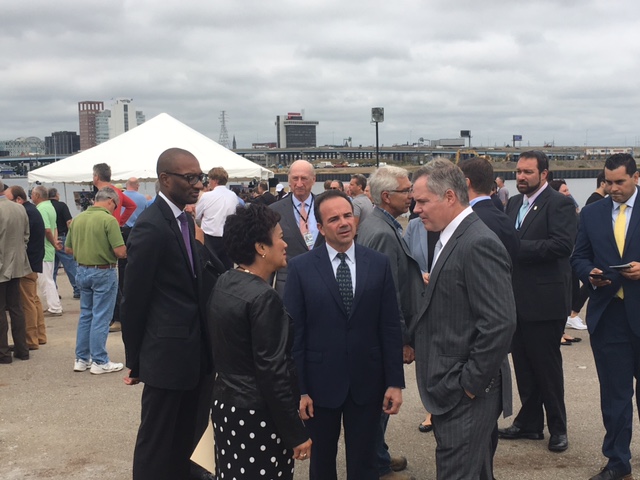 Bridgeport — MGM Resorts International launched a glitzy new campaign Monday to expand into Connecticut, an effort that curiously coincides with the Trump administration, at least temporarily, halting the state’s two federally recognized tribes’ from building a casino in East Windsor to compete with a new MGM resort in Springfield, Mass.

The Nevada-based gaming giant, after telling legislators for two years they would be foolish to approve the tribes’ plan without an open competition, now is seeking legislation in special session granting it exclusive rights to build a waterfront casino resort in Bridgeport, a gateway to the lucrative New York City gambling market.

Led by James Murren, the Bridgeport-born chairman and chief executive of MGM, the company demonstrated its political support at a waterside press conference attended by legislators, Mayors Joseph P. Ganim of Bridgeport and Toni Harp of New Haven, union members and a local partner who owns the site, Robert W. Christoph.

In a bid to insert its proposal into the special session now under way to resolve a summer-long budget impasse, Murren cast MGM as a savior able to create thousands of jobs at a time when Connecticut is reeling from a stagnant economy, the loss of corporate headquarters and faltering tax revenues.

“I have to say when I look at my home state: What is happening? Is this the best we can do? Corporate headquarters, corporations leaving the state. Taxes continue to rise. Jobs not being created,” Murren said. “It’s frankly heartbreaking to see.”

MGM is promising a one-time $50 million licensing fee to the state, $8 million in annual payments to Bridgeport, a jobs-training center for New Haven and projected annual gaming taxes to the state of about $300 million, although the company declined to share the assumptions behind those projections. It promised a full economic analysis in the coming week. 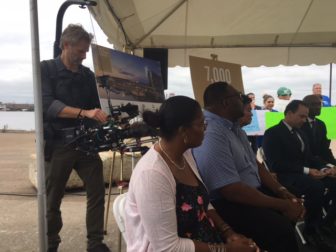 A steady-cam operator hired by MGM records the proceedings for a lobbying campaign.

A camera crew circled the proceedings, gathering material for digital and television commercials MGM intends to use to persuade legislators to walk away from limited casino legislation passed on the final night of the regular session in June and instead embrace turning Bridgeport, the state’s largest city, into a major gambling resort destination.

As MGM unveiled its pitch under a tent on the waterfront, state officials were trying to assess a puzzling letter from the Department of the Interior that neither grants nor rejects a federal approval necessary for the tribes to proceed in East Windsor.

“It is the same as a no vote,” said Clinton, the senior MGM executive who has led the lobbying effort to both block the East Windsor project and induce Connecticut to give MGM a major entree into the lucrative New York City gambling market.

The state’s authorization of the East Windsor casino is contingent on the Department of the Interior’s Bureau of Indian Affairs approval of amendments to the state’s gaming compacts with the Mashantucket Pequots and Mohegans, a precaution to ensure the deal would not jeopardize more than $260 million the tribes now annually pay the state in return for exclusive rights to casinos.

“We are moving forward,” said Andrew Doba, a spokesman for the tribes’ joint entity, MMCT.

But he did not address how the tribes can proceed in the absence of federal approval that is mandatory under the terms of the legislation passed by the General Assembly and signed by Gov. Dannel P. Malloy.

Chris Collibee, a spokesman for Malloy was less sanguine than Doba. He said, “The response we received from the BIA will clearly slow down the process.”

Malloy said he could not envision signing any legislation that jeopardized the state’s long-standing deal with the tribes in which they pay the state 25 percent of its gross slots revenues from their casinos, Foxwoods Resort and Mohegan Sun, in return for exclusive rights to gaming in Connecticut.

“Simply put, authorization of this facility would violate the existing compacts between the two tribes and the state which would immediately end the slot payments that currently send the state hundreds of millions a year in much-needed revenue,” Doba said. “Our state’s elected officials saw through their dishonesty last session, and we expect them to see this latest fib for exactly what it is – another bought-and-paid-for piece of misinformation.”

MGM says the state could delay the loss of the slots revenue until the new casino was opened, not approved.

Attorney General George Jepsen had no immediate comment on the letter from Michael S. Black, a career BIA employee who is now the acting assistant secretary for Indian affairs at the Department of the Interior. It represents a stunning reversal, coming six months after another career official, James Cason, assured the tribes in writing that approval of amendments to the compact was virtually certain.

“We are reviewing the letter from the Department of the Interior in consultation with relevant policymakers,” said Jaclyn M. Severance, the attorney general’s communication director. “We would decline to comment further at this time.”

Jepsen previously had warned lawmakers that policy decisions at the BIA are susceptible to political influence. Connecticut is a case in point: It successfully lobbied the BIA years ago to overturn federal recognition of the Schaghticoke tribe, which would have authorized it to pursue development of a casino under the Indian Gaming Regulatory Act.

Black’s letter complains of insufficient information, yet he does not identify what additional information is necessary for the BIA to reach a decision.

“We have completed our review of the Amendment,” Black wrote. “We return the Amendment to you to maintain the status quo as action on the Amendment is premature and likely unnecessary. The Amendment addresses exclusivity provisions of the Gaming Compact. We find there is insufficient information upon which to make a decision as to whether a new casino operated by the Mohegan and Mashantucket Pequot Tribes would or would not violate the exclusivity clauses of the Gaming Procedures.

“The Tribes have entered into an agreement with the State whereby they have agreed that the exclusivity provisions will not be breached by this arrangement. Therefore, our action is unnecessary at this time.”

But it is necessary, if the project is to go forward under existing Connecticut law.

A copy of the letter was sent to U.S. Sen. Dean Heller, R-Nevada, who had tried to block the East Windsor casino with a defense authorization amendment banning tribes from developing casinos off tribal lands. It failed.

Heller’s office did not respond to an email asking if the senator had asked the BIA to write the new letter.

Nedra Darling, a spokeswoman for the Department of the Interior on Indian issues, had no immediate comments on the questions raised by Black’s letter: Why can’t the department rule on the request for approval of the amendment to the compacts? What further information is necessary?

Under a deal struck in the early 1990s, the tribes agreed to annually pay the state 25 percent of its gross slots revenues in return for exclusivity. The payments have dropped from a high of $407 million in 2007, the year before the recession, to about $260 million in the face of competition from surrounding states. 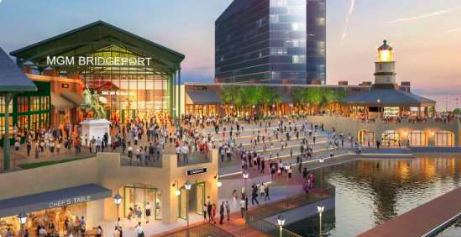 MGM’s rendering of its Bridgeport proposal.

Approval of an MGM casino in Bridgeport would free the tribes of their obligation to share the slots revenue. MGM is projecting, though not promising, to exceed the lost revenue. At a “market gaming tax rate” not named, MGM says its gaming tax payment on its Bridgeport revenues would top the $296.4 million the tribes paid in 2013.

No casino has ever opened under a commercial casino license granted directly by legislative action, as MGM is asking now. Clinton said the precedent already has been set by Connecticut’s authorizing the East Windsor casino.

The General Assembly justified approval of the East Windsor casino without an open competition, because granting a commercial license to anyone other than than tribes would abrogate the revenue-sharing deal. It was viewed as a limited casino expansion projected to blunt the loss of gambling business to Springfield, not grow gaming revenue in Connecticut.