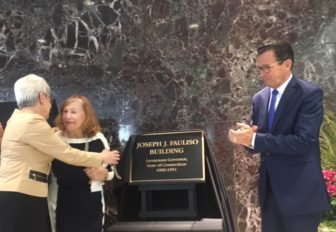 In a plaza lobby linking the two towers, visitors will go left to the Grasso building and right to the Fauliso building. Rank has its privilege: The taller of the 15- and 11-story towers was named for the late governor.

“They were the best of friends,” said Ann Marie Fauliso, the lieutenant governor’s widow. “We were all very close.”

Susan Grasso, the governor’s daughter, said it was appropriate that the politicians’ two names would face each other.

Grasso was elected governor in 1974, becoming the first woman to become a governor in the U.S. without succeeding her husband. She had been secretary of the state and a member of Congress.

In early 1980, Grasso convinced Fauliso, who was preparing to retire as the state Senate’s top leader, to run for re-election and give her a reliable ally overseeing the Senate agenda. By year’s end, Grasso would resign, dying from cancer. Lt. Gov. William A. O’Neill would succeed her, elevating Fauliso to lieutenant governor, a post he would hold for the next decade.

The state office complex on Columbus Boulevard is one of several real estate moves by the administration of Gov. Dannel P. Malloy to shed expensive leases in Hartford. It was purchased for $34.5 million and refurbished for $48 million.

With the acquisition and remodeling of the Grasso-Fauliso complex and a building at 55 Farmington Ave. in Hartford, the state was able to empty a mold-ridden building on Sigourney Street as well as the State Office Building, which is now being renovated.

Once the State Office Building is renovated, the staffs of the attorney general and treasurer will leave their leased offices at 55 Elm Street.