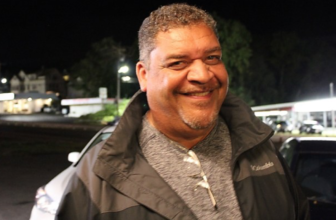 After 27 years as New Haven’s most formidable elected officeholder, Rosa DeLauro is facing her first challenge from an experienced pol within her own party — who seeks to outflank her on the left on health care.

Bryan Anderson made that challenge official Tuesday by announcing his candidacy for the 2018 Democratic nomination for Third U.S. Congressional District representative. DeLauro has held the seat for 14 two-year terms, facing no viable challenges from Republicans or Democrats in her reelection campaigns.

Anderson, a former New Haven city alderman and housing authority executive director, is looking to return to Washington, D.C., where he first ventured at age 14 to work as an intern for the late moderate Republican U.S. Rep. Stewart McKinney.

Anderson, who’s 62, made his Tuesday campaign announcement on the steps of City Hall in Milford, where he currently serves as an alderman.

“I’m not running against Rosa,” Anderson said this week over a plate of red snapper sushi in an interview that included no criticisms of the incumbent. Rather, he said, amid all the political upheavals in the country, he believes the time has come for “change” in the Third District along with a fresh vision.

His working slogan: “A New Way for a Better Day.”

For years ambitious baby-boomer politcians have waited for the chance to seek the Third District seat but hesitated to do so until the energetic DeLauro, who’s now 74 and plays a leading role in the party’s liberal wing on Capitol Hill, retires.

Challenger Anderson described a candidacy with an issues focus on “Medicare for All” single-payer health care, removal of American troops from Afghanistan, and job creation. He also plans a focus on a personal biography that evokes an unusual mix of political labels as well as a unique connection to the diverse planets of the Third Congressional District solar system: the true-blue New Haven epicenter (and Middletown gerrymandered fringe); Trump country in the lower Naugatuck Valley; purple shoreline towns.

“I’m African-American. My family has historically been not only in New Haven but in the [surrounding towns]. I’m LGBT. I’ve been a progressive Republican and a progressive Democrat.”

Anderson himself grew up on Newhall Street in Hamden, attended Hamden High and UConn. He ran “Gypsy Moth” Republican Larry DeNardis’s successful race for the Third District seat in 1980. Anderson settled in New Haven, served as a Ward 27 alder from 1992-94, ran the city housing authority as well as a drug-treatment program in the old Elm Haven projects. He moved to Milford 20 years ago, and became an alderman in 2011. For the past 15 years, he has commuted to the Bronx to teach elementary school at PS 47. (He retires in November.) 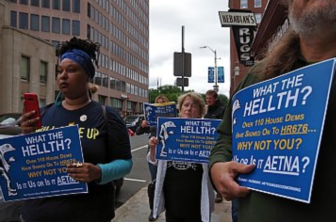 His family had been Republican for generations, pro-environmental preservation, pro-choice, pro-civil rights Republicans descending from “the party of Lincoln,” not to mention McKinney and former U.S. Sen. and Gov. Lowell Weicker (for whom Anderson worked as a Washington intern). He said he began drifting from the party as it hardened stances on abortion and gay rights. Twenty years ago he switched parties; he called the GOP-led impeachment of President Bill Clinton the “final straw.”

He also watched close friends die of AIDS. He acted as a conservator for a “dear friend” who struggled to keep her home as her health deteriorated from MS.

“I watched too many people, who I loved, struggle through financial issues relative to their health care needs,” Anderson said. He came to see health care as a right, and the insurance industry as a barrier to that right. He embraced a single-payer health care system. He supported candidates (like Bill Bradley and Howard Dean) who embraced universal care. In the 2016 presidential race, he campaigned in New Hampshire and hosted volunteer phone-banking sessions in his home for the candidacy of Democrat Bernie Sanders, drawn to his single-payer health care and universal free state-college tuition stands.

In this upcoming campaign, Anderson said, he plans to make support for the House version of the “Medicare for All” bill a central plank. DeLauro, who supported Hillary Clinton in 2016, has spoken in support of universal health care (and in general praised Bernie Sanders’ policy agenda) but voted for more incremental coverage expansions that she said had a more realistic chance of passing.

In July single-payer advocates picketed her Elm Street office to protest her decision not to support the House “Medicare for All” bill, sponsored by U.S. Rep. John Conyers. Anderson said this week that he would sign onto the bill as a cosponsor. (Click here for a story about the demonstration and DeLauro’s staff’s response.)

“We have a health care system that is still run by the insurance industry. If we we’re a believer in promoting people’s needs, we need to move beyond being tethered to employment [for coverage],” Anderson said. “We need to fight for Medicare for All.”

Anderson also said he plans to call for an “end to the war in Afghanistan.”

“We can better use the expenditures at home” to support the costs of converting to single-payer health care, he argued.

“We’re now entering the 17th year of this war. We have brought up an entire generation with America at war and the war machine.” He argued that the U.S. can use its influence as a global leader to convince other nations to force all parties—including the Taliban, which controls more than half the territory in the country —into a negotiated settlement. “We need to exhaust every diplomatic channel,” he said.

(DeLauro has for years called for the U.S. to “end the war in Afrghanistan,” most recently in these remarks last month responding to President Trump’s announced build-up: “[B]ring our troops home. Neither they nor the American people signed up for an endless war overseas. It is time for the citizens of Afghanistan to take responsibility for the future of their country, and for our government to shift focus back to nation-building here at home.”)

On job creation, Anderson said it’s time to press the feds into funding major infrastructure projects, especially for transportation — a “next big thing” to follow the completion of the Pearl Harbor Memorial Bridge. As an I-95 daily commuter as well as a train rider, he said, he sees how “transportation is failing commuters every single day.” (Click here for a story about DeLauro and infrastructure spending.) Anderson also spoke of his experience in various political and governmental jobs helping to obtain federal money for Union Station, the Hamden Marketplace, Casa Otonal, and the Shubert theater; as a Congressman, he said, he’d push for federal support for local computer-coding training, apprenticeship programs, online retail development.

He noted that DeLauro’s mother, former Alderwoman Luisa DeLauro, died two weeks ago at the age of 103. He said he knows the announcement of his challenge comes at a difficult personal moment for the congresswoman; he said he’s making his announcement this week because his campaign needs to operate on a timetable it already had in place to wage a serious run. “Luisa was a colleague of mine and a friend. I’m respectful of the fact that [Rosa DeLauro] has lost her mother,” he said.

DeLauro last faced an opponent running to her left in 2001, when Charlie Pillsbury was the Green Party’s candidate. Pillsbury made opposition to the war in Iraq his top plank; during the campaign, DeLauro came around to his position. Pillsbury wasn’t running to win that year; he said he was running to influence the debate. Anderson said he is certainly running to win in 2018. He may end up influencing the debate as well.