While conducting search and rescue operations in the mountains of Puerto Rico, a Customs and Border Protection helicopter located this home with HELP painted on its roof.

Washington – Yanil Terón is one of the more fortunate members of Connecticut’s large Puerto Rican community. In the past 24 hours, Terón learned from strangers in the Dominican Republic and Florida, that her brother and sister had survived the walloping Hurricane Maria gave her island birthplace six days ago.

With cell phone towers destroyed or damaged by Maria’s high winds and an island-wide power outage, Connecticut residents have had a hard time connecting with family in Puerto Rico. But somehow Terón’s siblings got word to people in the Dominican Republic and Florida who were willing to convey a message to Terón, who lives in South Windsor.

“People are getting creative,” she said.

Still, the situation on the ground in Puerto Rico is deteriorating by the hour, sparking a debate in Washington, D.C., over whether the federal government is doing enough. 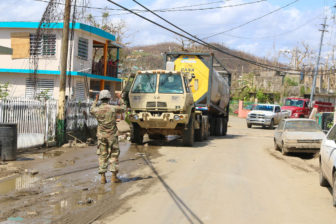 On Tuesday, Puerto Rico Gov. Ricardo Rosselló said that the island was on the brink of a “humanitarian crisis.” In many areas of the island, people are struggling with destroyed homes, a heatwave and dwindling supplies of food, fuel and fresh water. The number of hurricane-related deaths, now 16, is creeping up.

It took President Donald Trump five days to respond substantively to the plight of the U.S. territory. When he did so on Monday night, his comments on Twitter focused on the good job the Federal Emergency Management Agency is doing.

On Tuesday, Trump announced he will visit the island next week.

“I know many Puerto Ricans, and they’re great people, and we have to help them. It really was devastated. Some people say, I read it this morning, it’s literally destroyed,”  Trump said.

The president also said “the infrastructure was in bad shape as you know in Puerto Rico before the storm, and now in many cases, it has no infrastructure, so it’s, you’re really starting from almost scratch.”

More than 7 percent of Connecticut’s population is Puerto Rican or of Puerto Rican ancestry. Hartford is the U.S. city with the fifth largest Puerto Rican population in the United States — about 42,000 — and Bridgeport is seventh with 32,000.

Connecticut’s Democratic senators said Puerto Rico needs more federal help – fast – and that the Pentagon should step up its involvement.

Sen. Chris Murphy said he receives a steady stream of text messages from constituents who are concerned about relatives on the island. 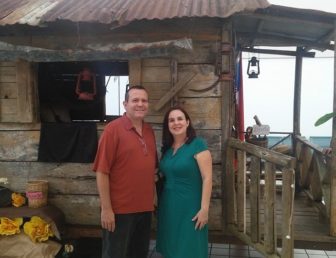 “They say they are suffering from food and water shortages,” Murphy said.

To Murphy, the federal response has not been vigorous enough

“The problem is the president thinks everything is ok,” he said. “We need more personnel on the ground. The problem now is not money, it’s personnel.”

At a Senate Armed Services Committee hearing Tuesday, Sen. Richard Blumenthal asked General Joseph Dunford, chairman of the Joint Chiefs of Staff,  if there were anything more the Pentagon could to do help Puerto Ricans “in the midst of this humanitarian crisis, which involves not only human suffering, but also the interruption, for some period of time, of communications, of travel, logistics, the lifeblood in terms of infrastructure of the island.”

“Is there more that the military can do?” Blumenthal asked.

Dunford responded that the military has identified “things that would allow us to open the airfields, open the ports, and get us that immediate electricity, fresh water and food to the people in Puerto Rico.”

“But if there is more that needs to be done, I can assure you that (Defense) Secretary (James) Mattis has placed Puerto Rico as a priority for all of us…” Dunford added.

Terón, the executive director of the Hartford-based Center for Latino Progress,  said Maria’s victims are trapped on an island with terrible logistics and diminishing resources. Unlike storm victims in Florida or Texas, they can’t drive away from trouble. With limited air flights because of damaged airports and air towers, the only other way off the island is by boat, and those are unavailable for most.

She agrees the hurricane’s victims could use more help from the armed forces.

“We need all hands on deck,” she said.

She’s glad she’s heard, even though it was second-hand, from her brother Ivan, who lives in San Sebastian, and her sister Enid, who lives in Caguan. But there’s been no news of three uncles or of several cousins who live near Puerto Rico’s faltering Guajataca Dam and had to be evacuated.

The Center for Latino Progress will join other Hispanic groups in a fundraiser on Sunday to help raise money for construction materials so Puerto Ricans, who are living in crowded school buildings and other shelters, can rebuild.

“The first sign of normalcy is when you can send your kids back to school,” she said.

FEMA’s funding will run out in mid-October. Blumenthal and other Democrats are pressing for swift approval of a bill that would fund FEMA and provide additional relief for Maria’s victims, including Community Development Block Grants to help Puerto Ricans rebuild.

“You are not alone in this humanitarian crisis. Congress will act. We will provide the kind of relief package, food, medicine, whatever supplies are necessary not only to endure and survive, but to eventually thrive…That is a promise that this United States Senate must make to our fellow Americans,” Blumenthal said in a speech on the Senate floor on Tuesday.

Terón and others also are pressing for suspension of the Jones Act, a World War II-era law that imposes punitive tariffs and fees on any ship that lands cargo and is not registered in the United States. The Jones Act increases the price of much of the food for sale on the island, as well as supplies needed for reconstruction, those seeking a suspension of the law say.

However, late Tuesday the Department of Homeland denied a request from members of Congress to waive the act.