Gov. Dannel P. Malloy said Thursday he is reviewing choices to fill two vacancies on the Connecticut Supreme Court, his sixth and seventh appointments to the seven-seat court since taking office in January 2011.

Justice Dennis G. Eveleigh, an appointee of Gov. M. Jodi Rell, reaches the mandatory retirement age of 70 on Monday. The other vacancy was created in July by the decision of Justice Carmen E. Espinosa to take senior status, a form of semi-retirement. She is a Malloy appointee.

With Eveleigh’s departure, the only justices on the court not selected by Malloy, the first Democratic governor in two decades, will be the chief justice, Chase T. Rogers, and the longest-serving associate justice, Richard N. Palmer. 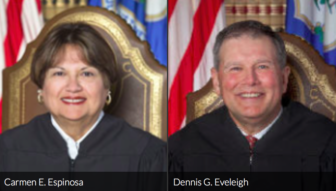 Espinosa, a former FBI agent and federal prosecutor, was the first Hispanic named to the bench in Connecticut. She was named to the Superior Court in 1992 by Gov. Lowell P. Weicker Jr., an independent. Malloy named her to the Appellate Court in 2011 and Supreme Court in 2013.

When he picks someone for Espinosa’s seat, it will mark the second time Malloy has named a successor to one of his own nominees to the high court. Lubbie Harper Jr., elevated by Malloy from the Appellate to the Supreme Court in 2011, retired in 2013.

The prospect of five Malloy nominees on the court is not seen in the same light as the ability of a president to tilt the ideological balance of the U.S. Supreme Court.

“I don’t think that the Connecticut Supreme Court has court epochs in the same way the U.S. Supreme Court does,” Daniel J. Krisch, a co-chair of the state Bar Association’s appellate section, told CT Mirror last year. “There is not the same level of ideological divisions and not the same clear-cut differences.”

Still, Espinosa was an ally of Peter Zarella, a conservative justice who retired last year, as dissenters in a 5-2 decision reaffirming the end of Connecticut’s death penalty. Eveleigh was part of the majority.