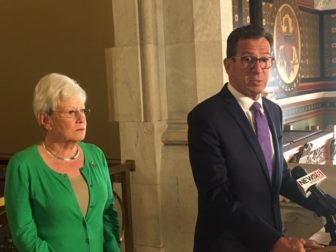 It’s a select club of unhappy conscripts, and membership comes with responsibilities. It meant reaching out to Gov. Dannel P. Malloy after the massacre of 26 children and educators at Sandy Hook nearly five years ago. On Monday, it was Malloy’s turn. He called the mayor of Las Vegas and governor of Nevada to offer condolences and assistance.

“What I’m talking about is, we have a fair amount of experiences as a result of our difficulties on the psychological-support basis, the social work-support basis, reaching out to families,” Malloy said. “We certainly have had a certain amount of success in taking on this issue, understanding it, studying it properly, putting it in the appropriate context in our own state.”

Police have protocols for responding to mass casualty, active shooter events such as the attack in Las Vegas that left at least 59 concert-goers dead and more than 500 injured. Less so for the elected officials who confront the aftermath of mass shootings, a list that’s grown since the killing of 12 students and a teacher at Columbine High School in Littleton, Colo., in 1999.

“We had people reach out to us, from Colorado, for example, that helped us find our way through, how to manage this situation in the short run and on a longer basis,” Malloy said of the Sandy Hook shooting.

On the morning of Dec. 14, 2012, Malloy was notified of a shooting at the Sandy Hook School in Newtown. Hours later, Malloy found himself in a firehouse with distraught parents waiting for news of their missing children. It was the governor who eventually told them that all survivors had been reunited with their families. Their children were dead.

Malloy and Lt. Gov. Nancy Wyman, who stood with the governor as he briefly spoke with reporters outside his office Monday, spent the following days and weeks attending wakes, funerals and memorials. His energies turned to passage of a sweeping gun-control law in the spring, an issue certain to be visited in Nevada.

His messages for the officials in Nevada were more personal than political.

Malloy said he left a message for Brian Sandoval, the Republican governor of Nevada, a man he’s met at meetings of the National Governors Association. He talked to Mayor Carolyn Goodman. Malloy said he knows her and her husband, Oscar Goodman, the city’s former mayor.

“A number of my friends as mayors and governors have gone through this, and I always give the caution about taking care of one’s self as well as the first responders who appeared at the scene and had to deal with this carnage,” Malloy said. “I think there’s a lot of help we can offer. No one need take it. It’s what neighbors do, and friends do.”