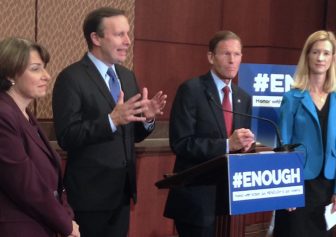 Washington – Reacting to the horror of the mass slaying in Las Vegas late Sunday, and led by Connecticut’s lawmakers, there’s a new push in Congress to reintroduce gun control bills that failed in the past.

The fate of those bills is uncertain, but gun control advocates had an unexpected victory on Tuesday.

House Republicans put off a vote – indefinitely – on a bill that was to be considered this week that would have removed restrictions on the sale of gun silencers.

The silencer bill is “not scheduled right now. I don’t know when it will be scheduled,” said House Speaker Paul Ryan, R-Wis.

The fate of another bill promoted by the National Rifle Association, the “Concealed Carry Reciprocity Act” that would allow those with permits in one state carry their firearm into another state, is also in doubt – at least in the short term.

Congressional Republicans said bills that would increase federal regulations on firearms are also off the table for now.

Sen. Chris Murphy, D-Conn., plans to introduce a bill that would broaden FBI background checks of gun purchasers. The details of that bill, which Murphy said will be similar to previous versions that failed in Congress, including one considered just months after the mass murder at Sandy Hook elementary school in December of 2012, are not finalized. That’s because Murphy is seeking GOP support for the legislation.

“I do think that Republicans are starting to realize the downside of being on the wrong side of this issue,” Murphy said.

And Sen. Dianne Feinstein, D-Calif., plans to resuscitate a federal ban on certain assault weapons and “bump stock” devices that enable a shooter to rapidly fire off rounds without converting a rifle to a fully automatic weapon. Authorities say there’s evidence Las Vegas shooter Stephen Paddock modified at least one of his rifles with a “bump stock” device, which is now legal. Weapons owned by Paddock were still being examined by authorities to see if they were capable of automatic fire.

There’s no guarantee the legislation will be considered, much less approved by the Senate.

But Blumenthal said the attack that left at least 59 dead and more than 500 wounded has led to “a growing sentiment” that Congress should act on gun safety issues.

He said he felt that sentiment in the Senate gym Tuesday morning, as Republican colleagues saw photos and videos of the slaughter on the facility’s television sets.

“There’s a sense that enough is enough,” he said.

Both Murphy and Blumenthal held a press conference Tuesday with a few Senate Democratic gun control advocates to try to drive support for a new push for congressional action on gun laws.

“This epidemic of gun violence is uniquely American,” Murphy said.

He said Congress’ failure to act on gun control is “a quiet endorsement of these continued killings.”

The NRA has been silent since the massacre in Las Vegas.

While legislation that would weaken federal gun laws has stalled, Murphy said “the (gun) industry expects to get something” from the Republican-controlled House and Senate.

“There’s no doubt we are playing defense,” he said.

But to Blumenthal, “the nation reached a tipping point” after the Las Vegas shooting.

The bloody attack on attendees of a country music festival appears to have left the White House hesitant as to how to respond.

President Donald Trump, who plans to visit Las Vegas on Wednesday, told reporters on Tuesday, “We’ll be talking about gun laws as time goes by.”

But it’s unclear whether Trump will support efforts to tighten – or loosen—federal gun laws.

On Tuesday, several Republicans said now is not the time to debate gun control.

“I just think politicizing this terrible tragedy is beyond disgusting, and we ought to wait a respectful period of time, out of respect for people who lost their lives or were injured, before we get into the push and shove of politics around here,” said Senate Majority Whip John Cornyn, R-Texas.

In a fiery op-ed published by the Washington Post, Rep. Jim Himes, D-4th District, dismissed criticism that gun control advocates are trying to score political points from a tragedy.

“They will tell you it’s ‘too soon’ to discuss policy in the aftermath of this shooting,” Himes said. “That it dishonors the dead to “politicize” the tragedy. They will insist, instead, on meaningless moments of silence designed to look compassionate and hide our inaction. Malarkey.”