Washington – The Las Vegas shooting on Sunday has widened the fissure between congressional Democrats – who have renewed a push for gun control legislation – and Republicans who are condemning their political rivals for “politicizing” the issue.

“All of the members of Congress – have courage, be unafraid, do your job, bring common-sense gun control legislation to a vote,” Lewis said. How many dead bodies will it take to wake up this Congress?”

Meanwhile, a number of congressional Republicans said it’s inappropriate to bring up gun control and politicize the massacre that left 59 dead and hundreds injured in Las Vegas.

Senate Majority Leader Mitch McConnell, R-Ky., said it’s too soon to talk about legislation when the investigation into the shooting by Stephen Paddock has not been completed.

“It’s particularly inappropriate to politicize an event like this … entirely premature to be discussing about legislative solutions, if any,” McConnell said.

House Speaker Paul Ryan, R-Wis., has taken up the National Rifle Association’s long-standing argument that the focus should be on mental health care reform.

“One of the things I’ve learned from these shootings is that often underneath this is a diagnosis of mental illness,” he said.

But Ryan also has abandoned plans to bring up an NRA-backed bill this week that would make it easier to buy gun silencers, a proposal approved by a key House committee three weeks ago.

Another NRA priority, the “Concealed Carry Reciprocity Act” that would allow those with permits in one state carry their firearm into another state, is not expected to be considered by the House anytime soon.

In the Senate, Connecticut’s lawmakers were among the first to call for congressional action on gun control. Sen. Chris Murphy, dubbed the “Sandy Hook senator” by some because he represented Newtown when he was in the U.S. House, created a stir by saying his colleagues should “get off their ass” and do something. 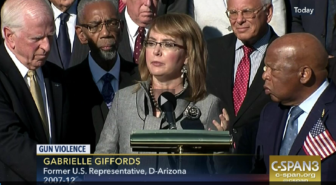 Murphy plans to reintroduce a bill that would broaden FBI background checks of gun purchasers. Blumenthal plans to revive his bill banning “high-capacity” magazines and to co-sponsor other legislation.

On Wednesday, Sen. Dianne Feinstein, D-Calif., introduced a new bill in the gun control lineup. It would ban “bump-stock” devices that enable a shooter to rapidly fire rounds without converting a rifle to a fully automatic weapon. Authorities say a number of the guns owned by Paddock were modified with  a “bump stock,” which is now legal.

On Wednesday, Blumenthal and Murphy said they co-sponsored Feinstein’s legislation.

“Bump stock devices are carnage force-multipliers. The searing noise of that staccato firing in Las Vegas that we have all now heard countless times should be a wake-up call to this Congress,” Blumenthal said. “We should come together to stop the sale of a device that is patently designed just to kill people.”

Some Connecticut Republicans joined the national GOP in criticizing the Democratic call to action.

“If you cannot resist the compulsion to raise money for your re-election as the dead are being identified, just do it. Don’t cloak your grimy impulses behind other groups on a solemn day,” Rennie wrote on his website.

Matthew Corey, a small business owner from Enfield who is running against Murphy as a Republican, blasted his rival in a press release, saying, “Murphy bears responsibility for what happened in Las Vegas and the shooting of (House Majority Leader) Steve Scalise, and has blood on his hands, due to his constantly divisive rhetoric in Washington, and his inability to find or forge a solution to the escalation in violence.”

“His first instinct was not for the victims or their families, nor the brave Police Officers and First Responders who risked their lives to save others, nor for the heroic medical professionals who labored under intense, triage conditions to save as many as possible. His first instinct was to politicize the tragedy,” Corey said.

Murphy campaign spokeswoman Laura Maloney said, “The notion that this political fight needs to be suspended in the wake a mass shooting is an argument perpetuated by the gun lobby and those who want the status quo to never change.”

“These mass shootings, as well as the daily carnage of gun murders, keep happening because politicians are so afraid of the gun lobby that they refuse to act,” Maloney said. “Chris isn’t afraid, and every single day he is working to build a political movement that will eventually defeat the gun lobby.”

She said, however, that the fundraising email “should have been clearer about the options available to those who chose to donate.”

“But Chris has been totally transparent about the need to spend every single day building a well-funded political movement that will eventually win changes in the law to help end this epidemic of mass carnage,” she added.

“There is no more appropriate time to talk about an issue like this than in the wake of a national tragedy in which guns have been involved,” he said.

But, Schurin said, “A case could be made” that politicians should not fundraise over a tragedy.

“But this is a time to remind people to contribute to gun control groups,” he said.

Gary Rose, head of the political science department at Sacred Heart University, also said it is the right time for Democrats to try to change federal gun policy.

“There is nothing wrong with politicizing something that is ripe for debate,” he said. “It’s appropriate and would be very strange if there were no discussion about gun control at a time like this.”