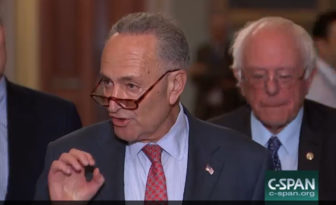 U.S. Senate Democratic Leader Chuck Schumer, D-NY, says the new proposal to save the Affordable Care Act has wide support in both parties.

Washington – A rare bipartisan deal has been reached on one of the most contentious issues in Congress, the Affordable Care Act. It includes the restoration of key payments to insurance companies that President Donald Trump cut off last week.

Sens. Lamar Alexander, R-Tenn., and Patty Murray, D-Wash., announced Tuesday that their week’s-long search for a short-term fix of the Affordable Care Act has been reached. Negotiations between the the top Republican and Democrat on the Senate Health, Education, Labor and Pensions Committee had been aimed at stabilizing insurance markets and their agreement contains key provisions sought by congressional Democrats.

The deal would revive, for two years, the cost-sharing reduction payments insurers received under the ACA that allowed them to lower the cost of deductibles and co-payments for low-income Americans who purchase “silver”-tiered plans.

Trump cut off the payments last week, calling them unwarranted “subsidies” to wealthy insurers. In anticipation that the CSR payments would end, the Connecticut Insurance Department approved hefty rate increases for policies sold by Connecticare and Anthem on the state ACA exchange, Access Health CT.

But Trump’s move left other states scrambling to keep insurers on ACA exchanges.

The bipartisan agreement would also restore $106 million in funding for advertising and marketing of the Affordable Care Act that helps people enroll in insurance plans. Funding for programs that help enrollment  — which begins Nov. 1 for the 2018 policy year — had been cut by the Trump administration.

In exchange, Republicans would get more flexibility for states to offer a wider variety of health insurance plans while maintaining the requirement that sick and healthy people be charged the same rates for coverage.

“This bipartisan agreement is a victory for American patients and consumers, showing how we can work together across party lines,” said Sen. Richard Blumenthal, D-Conn. “Extending payments for critical healthcare subsidies ensures that countless Americans will retain access to their healthcare, in spite of the president’s repeated attempts to sabotage insurance markets.”

He urged Senate Majority Leader Mitch McConnell to bring the agreement to a Senate floor “for immediate consideration and a vote.”

Trump on Tuesday indicated he would support the deal. But even with the president’s endorsement, it’s not clear it will get through Congress, especially in the U.S. House, where Speaker Paul Ryan, R-Wis., may face opposition from conservative members who oppose taking any action that’s seen as shoring up the ACA.

Sen. Chris Murphy, D-Conn, on Tuesday called the agreement “good news” and said he is eager to take a look at it.

But he also said “the deal will not work if the president continues his campaign to sabotage” the Affordable Care Act.

Blumenthal, Murphy and other Democrats viewed Trump’s use of his executive authority to end CSR payments and take other steps to undermine the ACA as “sabotage” of the health care bill after Congress was unable to repeal it for lack of enough GOP votes in the Senate.

“None of it matters if the president does not make a commitment to end his temper tantrum,” Murphy said.