Geoff Luxenberg out as Dan Drew tries to refocus campaign 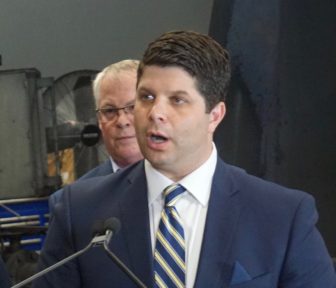 Dan Drew at a recent press conference when he named Rep. Liz Lineman as his running mate.

Middletown Mayor Dan Drew tried to reboot his beleaguered campaign for the Democratic gubernatorial nomination Wednesday, abruptly parting ways with Geoff Luxenberg, the political strategist he put on the city payroll as his chief of staff in August.

Luxenberg’s departure comes after the state’s largest newspaper, the Hartford Courant, called in an editorial for Drew to quit the race over a fundraising letter sent to city employees, including police officers whose home addresses were not public information. The editorial called it “a shakedown.”

The State Elections Enforcement Commission opened an investigation Wednesday into the legality of the solicitation. They commission was acting on two complaints, including one filed by the campaign manager of a Republican rival, Tim Herbst.

Drew, one of five Democrats raising significant funds for a run to succeed Gov. Dannel P. Malloy, a Democrat not seeking a third term, did not attribute Luxenberg’s exit from city hall to the fundraising letter or any other issue. He said, “I think Geoff felt it was time to move on.”

Luxenberg, a former Democratic state representative from Manchester, left his campaign consulting firm, the Vinci Group, whose clients include Drew’s past runs for mayor and his current campaign for governor, to become Drew’s top aide. He is not returning to Vinci.

“Geoff is not returning to my company,” said Mike Farina, his former partner at Vinci. “I bought him out, and that’s the way it’s going to stay.”

Of the five Democrats raising money for a gubernatorial campaign, Drew is the only declared candidate. Another Democrat, Sean Connolly, recently resigned as the commissioner of veterans affairs and opened an exploratory campaign.

The other Democrats with exploratory committees are: Joe Ganim, the Bridgeport mayor who returned to city hall in 2015 after a corruption conviction; Jonathan Harris of West Hartford, a former legislator and Democratic Party official under Malloy; Chris Mattei of Hartford, a lawyer with no electoral experience; and Dita Bhargava of Greenwich, a former Wall Street trader and portfolio manager, also running first time for statewide office.

Drew, 37, tried to squelch the fundraising controversy with an apology to city employees Sept. 21.

By calling for higher taxes on the wealthy and opposition to demanding concessions from public-sector unions, Drew distanced himself from Malloy with an appeal to labor and the political left.

Drew raised $53,530 in his first three months as a declared candidate participating in the voluntary program for public financing, which limits him to contributions of no more than $100. The maximum for exploratory campaigns is $375.