Leaving Puerto Rico was hard, but Milagros Dávila has faith 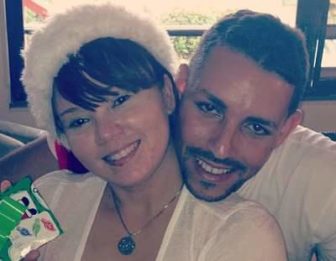 Milagros Dávila and her husband Eddie Taveras didn’t want to abandon their lives in Salinas, Puerto Rico. But after Hurricane Maria devastated the island, they were left, as were most Puerto Ricans, without clean drinking water, electricity, food or jobs.

Taveras, an electrical engineer, had the good luck to find work at a Connecticut company thanks to the help of Dávila’s brother, who had relocated to the state three years ago. The couple – they are both 34 years old – now live in Rocky Hill.

This interview is available in Spanish.

But it was difficult to leave Puerto Rico. With the major airports largely destroyed, there were few flights out of the island. After waiting all day, Dávila and Taveras were able to snare a flight when two other passengers suddenly canceled their trip.

Things haven’t changed much since Oct. 5, the day the couple said goodbye to their life in Puerto Rico.

About 3 million Puerto Ricans, or more than 80 percent of the island’s residences, don’t have electricity.

More than a third of the homes in the U.S. territory lack clean water.

Last week, Puerto Rican Gov. Ricardo Rosselló visited the U.S. Capitol and the White House and said there’s “much work ahead” on the island, despite the impression the situation there is “stabilizing.”

Rosselló made his trip to Washington after President Donald Trump took to Twitter to warn the future help the United States provides the island would be limited.

A month after Maria battered Puerto Rico, tens of thousands of Puerto Ricans have left for the continental United States, many of them to Connecticut. Most face uncertainty about how they will re-establish their lives.

But Dávila is optimistic.

In this Sunday conversation, she talked to us about her experience and hopes.

What happened when the hurricane hit Salinas?

Salinas is in the south of Puerto Rico, close to the coast, and the sea rushed into the whole area. Thank God, my house is elevated and didn’t flood. But the road and the other houses flooded. They lost roofs, they lost furnishings.

We lost electricity. The winds started, heavy rain started. I didn’t sleep all night. I lost a little shed I had in the back yard for tools. It made a huge noise. I lost telephone service. I lost water service. We had no lights. It was pretty impressive. My house is made of cement and you could feel the storm inside the house. The windows were shaking, so hard that I thought they would break.

We were really watching the wind. It would come from one side, and we had to open the windows on the other side because we were afraid the air pressure would break them. We spent the day of the hurricane opening one set of windows and closing another. The winds came from one side then the other.

I never experienced a storm of this category. But we did have George, Hurricane George, that hit in 1998 when I was 15 or 16 years old, and that was a strong storm on the island. But, as a teenager, I could step out on my balcony during the hurricane. But with Maria it was impossible even to look out a window.

What happened after the hurricane hit Salinas? 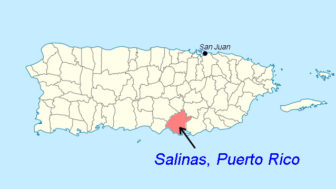 Even as of today, things are not moving forward. There are no lights. There is no electric service. There is no cellular service. There is no water. There is no way to get supplies because most of the businesses are closed. You had to go out of town, outside Salinas, and go to another town to find food, water and money because there are no banks where you could withdraw money. The few businesses that are open – it could be a bakery, it could be a gas station or a locally owned restaurant – their prices have been raised steeply, about three times the usual.

When did help arrive in Salinas?

In the time we were there, it never arrived.

You did not see anyone from the U.S. military or any Puerto Rican government agency?

No. The only military there were assigned to the gas stations to control customers and ration the gasoline because we were limited on how much we could buy. If you went there to fill your car, you could only buy up to $20 of gasoline.

Nobody came with food or water?

Nobody came to my town. I had to go to bigger cities. For example, the closest to me is Ponce, where there were more supplies and help. And from Salinas to Ponce you had to go through four other towns. Or, you could go to the capital, San Juan, where electricity was first re-established.

‘We made that decision because, really the cost of living was tripling, prices were tripling. We didn’t have enough money to survive. Without money and without jobs. We didn’t have power, we didn’t have supplies, so there was no work.’

How did you decide to leave Salinas and come here?

We made that decision because, really the cost of living was tripling, prices were tripling. We didn’t have enough money to survive. Without money and without jobs. We didn’t have power, we didn’t have supplies, so there was no work.

But you had jobs before the storm hit….

I am a medical assistant. And hospitals weren’t open. There was no electric power, so I had no work. I had worked in a private hospital in Ponce. But it had no telephone system, no power, no computer system. And to operate a hospital needs patients. But if you don’t have resources, there is no way to get to Ponce.

And your husband was also out of work?

My husband is an electrical engineer and he also lost work. There were (storm-related) disasters in the manufacturing plant where he worked.

Your family in Connecticut helped you….

My brother is the only family I have here. He lives in Windsor and is also an electrical engineer. We came here because my brother asked his company to hire my husband, and the company did everything it could, as quickly as possible, to get us out of there and employ my husband here.

Is this the first time you’ve lived in Connecticut?

Yes. I had come on vacation to visit my brother last year. And I liked it. My brother told me I should come to live here, and I had that idea at the back of my head. And just about a year later, after the disaster caused by the hurricane….everything has happened so quickly that one has to say “wow.” There are times I get sad because I am from Puerto Rico, but …I must move ahead so I can help my family. I have sent them things so they can survive. 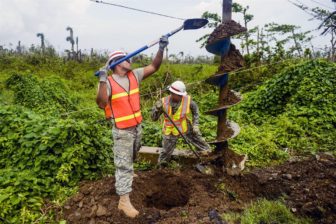 Yes. Yes. They live in the Rio Grande area. Rio Grande is in the northeast part of Puerto Rico.

How do you communicate with your parents?

I send them a message on Facebook Messenger. About two days afterwards, my mother contacts me using the same system, when she can get wifi by taking a trip to San Juan.

And do you have other family in Puerto Rico?

Yes, two sisters. And an aunt who lost her entire house.

What do you think of the aid the United States has offered?

Is that the United States government’s fault or Puerto Rico’s?

Really, it’s the system they have to distribute the aid.  And all the supplies they send, they don’t have a secure place to keep them. I can’t tell you whose fault it is. Some people say one thing, others another. Puerto Rico blames the United States, the United States blames Puerto Rico. But resources are not reaching the places they are needed and resources are perishing.

Puerto Rico has suffered a lot. It had problems before the hurricane and now those problems are much, much worse. Do you think you will return to Puerto Rico? Or will you stay in the United States?

Well, for now I think I’ll stay here. I hope to find work and move ahead to help my family. But I haven’t lost faith in returning at some point. It could be five years from now…everything depends on how Puerto Rico recovers. Before it was hard to find work. Now it’s worse.

And do you think other family members will join you in the United States?

I told my parents and I told my in-laws they should come here. It doesn’t need to be permanent. Because they are older and they don’t have to be suffering from want. The difficulty is obtaining airplane tickets so they can come here. It takes more than a month to book a flight.