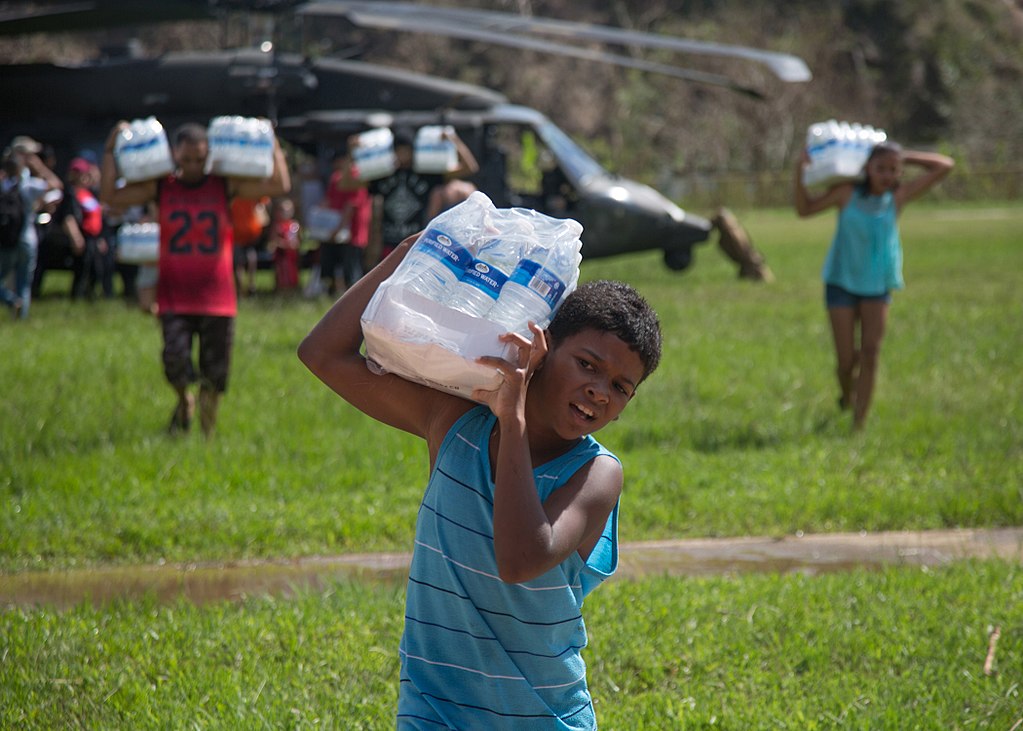 Sens. Richard Blumenthal and Chris Murphy are among lawmakers, mostly Democrats, who say the money in the relief bill – which also gives hurricane-related aid to Texas, Louisiana and Florida and funds wildfire recovery efforts in the West – is not nearly enough to help Maria-battered Puerto Rico.

“The United States has been screwing Puerto Rico for over 100 years,” Murphy said in a fiery speech on the Senate floor Wednesday. “And this is just the latest, most disgusting chapter.”

The United States retained sovereignty over Puerto Rico in the Spanish-American War as a condition of its victory over the Spanish.

“Puerto Rico did not ask to be part of the United States, we acquired the island,” Murphy said.

As a U.S. territory, Puerto Rico does not have a voting representative in Congress. Puerto Rico’s economy was hurt by U.S. trade and tax policy and was teetering before the storm, which has greatly intensified a pre-Maria exodus from the island.

Murphy said the United States has purposely kept Puerto Rico at a disadvantage to keep it from becoming a strong economic competitor with the mainland, “and there is an undercurrent in the discussion of Puerto Rico that is as pernicious as it is historical.”

Murphy also said “the lackluster response form the Trump administration is an outrage.”

The $36.5 billion package that Congress sent to Trump this week comes on top of a $15.3 billion disaster measure that passed in September, bringing the total tab to more than $50 billion. The money funds the Federal Emergency Management Agency and replenishes the federal flood insurance program, which was about to run out of funding.

The aid package also provides Puerto Rico with access to $4.9 billion in low-interest Treasury loans, which Blumenthal said only adds to the island’s massive indebtedness.

Blumenthal has been calling for a long-term “Marshall Plan” similar to the one initiated by the United States to help World War II-ravaged European allies, executed by a “relief czar” who is empowered to rebuild the island’s infrastructure.

“This measure must be followed by stronger, more robust steps,” Blumenthal said of Congress’s approval of the aid package.

Senate Minority Leader Charles Schumer, D-N.Y., has recently joined the call for a federal coordinator, or in Schumer’s words, a “CEO of response and recovery,” to manage the federal response on the island.

Schumer said the current response is “disorganized, slow-footed and mismanaged.”

Blumenthal said the United States should commit “tens of billions of dollars” in the short term and that it would take “much more” for long-term rebuilding of the island, which is still suffering from massive power outages and shortages of food and water more than a month after Maria hit.

Blumenthal hopes for a new relief package that would convert the $4.9 billion loan to Puerto Rico into a grant.

But the heavy cost of disasters that have struck the United States this year, and the GOP’s plan for an expensive overhaul of the nation’s tax system – as well as demands for increased federal funding to combat an opioid crisis and other priorities – may mean it’s going to be an uphill battle to appropriate a substantial amount of additional relief for Puerto Rico.

Blumenthal and Murphy are also among a growing group of lawmakers – both Democrats and Republicans — who want Congress to investigate why a two-year-old Wyoming company that had only two full-time employees when Hurricane Maria pummeled Puerto Rico was awarded a $300 million contract to rebuild the island’s electrical grid.

Whitefish Energy’s largest project at that point was a $1.3 million deal to “replace and upgrade parts of a 4.8-mile transmission line in Arizona,” a job it was given 11 months to complete. There are 2,400 miles of transmission lines in Puerto Rico.

Instead of activating “mutual aid” arrangements with other utilities, the Puerto Rican Electric Power Authority, or PREPA, decided to hire Whitefish, which is from the same small town as Interior Secretary Ryan Zinke.

Blumenthal said he believes the Army Corps of Engineers or some other federal agency should have had oversight of the contract.

Last week, Trump told reporters, “I would give myself a 10” when it came to his handling of the Puerto Rican crisis.

The nation is divided about the response.

A Harris-Harvard poll released this week found a majority of voters rated Trump’s response to Hurricane Maria as worse than his response to the hurricanes that hit the Gulf states earlier this year.