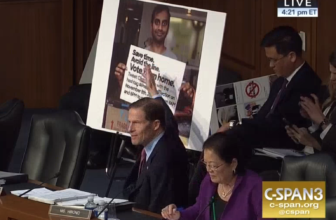 Sen. Richard Blumenthal points to a poster showing an ad posted on Twitter urging people to vote by tweeting.

Washington – Sen. Richard Blumenthal on Tuesday asked Twitter and Facebook executives what they knew about specific attempts by Russian trolls to disseminate information through fake ads and stories, and received little response.

As a member of the Senate Judiciary Committee that held a hearing on Russian attempts to influence the presidential election through social media, Blumenthal asked about a Twitter ad that featured popular comedian Aziz Ansari.

In the tweet, Ansari held a sign that said, “Save Time. Avoid the Line. Vote from Home.”

It urged Hillary Clinton supporters to vote for her by tweeting “ClintonKaine with the hashtag #PresidentialElection” on Election Day, even though online voting is prohibited in the United States.

Blumenthal asked Sean Edgett, Twitter’s general counsel, how many people had responded to the ad and tried to vote for Clinton by tweeting.

Edgett said he did not know.

“We were focused on removing the content,” he said.

Blumenthal also asked Facebook executive Colin Stretch about an ad that targeted 18- to 65-year-olds in Texas that said Hillary Clinton was unpopular among the military.

“We are not able to see who is behind the account,” Stretch said.

A representative from Google was also a key witness at the hearing. The three giant social media companies already have admitted that, unknown to them, Russian-backed accounts used their sites to share and promote content aimed at stirring political unrest.

Facebook says as many as 126 million people may have seen content from accounts tied to Russian sources. The other companies also said this week that the number of Russian-linked accounts on their sites was higher than previously disclosed. 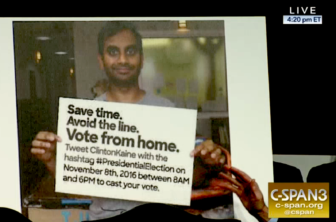 Members of Congress have questions about how this could happen, but split along party lines. Unlike Democrats, who said the use of social media was part of the Kremlin’s attempt to help elect Donald Trump, Republicans on the panel said the Russian meddling did not favor a particular presidential candidate in last year’s elections, but was aimed at creating discord.

“Russia does not have loyalty to a political party in the United States,” said Sen. Charles Grassley, R-Iowa, the chairman of the Judiciary Committee. “Their goal is to divide us and discredit our democracy.”

U.S. intelligence agencies, however, have said Russian President Vladimir Putin tried to sway the election in favor of Trump.

To try to quell the furor over the “dark” political ads posted on their sites, Google, Facebook, Twitter and YouTube announced this week they will start identifying their advertisers.