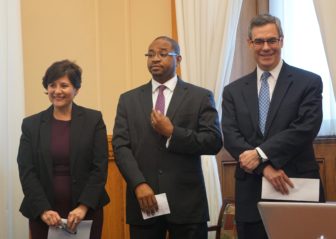 The General Assembly’s Judiciary Committee voted unanimously Wednesday to confirm the nominations by Gov. Dannel P. Malloy of two justices to the state Supreme Court and one judge to the Appellate Court.

Raheem L. Mullins and Maria Araujo Kahn, who now serve on the Appellate Court, now will take their seats as justices of the state’s highest court, the Supreme Court. William H. Bright Jr., a trial judge, will go the Appellate Court.

Mullins, 39, of Cromwell was a 33-year-old appellate lawyer in the Office of the Chief State’s Attorney when Malloy nominated him to the Superior Court in 2012. Malloy elevated him to the Appellate Court two years later. He has a law degree from Northeastern University.

Kahn, 53, of Cheshire is a former federal prosecutor named to the Superior Court in 2006 by Gov. M. Jodi Rell and to the Appellate Court by Malloy last May. She was born in Angola to Portuguese parents and emigrated from Africa to the U.S. as a 10-year-old. She has a law degree from Fordham University.

Once they are sworn, five of the seven justices on the Supreme Court will be appointees of Malloy, a Democrat who has been governor since January 2011.

Bright, 55, of Columbia was named to the Superior Court in 2008 by Rell. He has a law degree from the University of Chicago and was a partner at McCarter & English in Hartford before becoming a Superior Court judge.