DCF reaching out to same-sex couples as adoptive parents 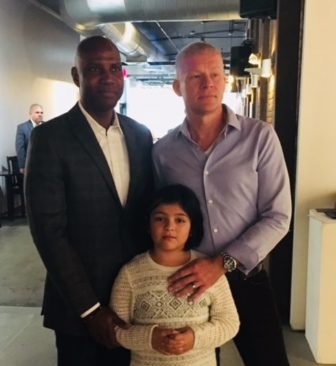 Troy Saunders, left, and Michael Brinckerhoff with their daughter, Indigo.

Connecticut’s governor and its commissioner of the Department of Children and Families, who played a role in legalizing gay marriage as a state Supreme Court justice in 2008, marked Adoption Awareness Month on Monday by highlighting the state’s outreach to same-sex couples as potential adoptive parents of children in foster care.

At least 87 same-sex couples have adopted a child from state foster care over the past 10 years. Last year, 436 children were adopted from foster care, with another 323 whose guardianship was transferred to a relative or friend.

Michael Brinckerhoff, the adoptive father of an 8-year-old daughter, Indigo, said his path to becoming a father began with an unexpected phone call three years ago from DCF: A child had come into the agency’s custody, and her mother was an old friend who wanted Brinckerhoff to take guardianship.

“I was like, ‘Whoa, a child. I only met her one time. She won’t even know me,” Brinckerhoff said.

He called his partner, Troy Saunders, who was on his way to work in Manhattan, told him about the startling phone call about a little girl in need of a home. “He said, ‘Go get her.’ And so our journey began,” Brinckerhoff said.

It took two weeks for the couple to decide they wanted to make the arrangement permanent, a process that requires background checks, licensing, home visits and training that can take about 10 weeks.

The 2010 census reported about 100,000 same-sex households with children. A study published three years earlier found gay and lesbian parents were raising 4 percent of all adopted children in the United States. The number is expected to be much higher a decade later.

“I know in some places, for some people, differences are not embraced,” Gov. Dannel P. Malloy said during a celebration at Real Art Ways in Hartford. “In Connecticut, we respect and value differences.”

Connecticut has a long history of supporting gay rights. It banned housing and employment discrimination based on sexual orientation in 1991. Malloy’s predecessor, Republican Gov. M. Jodi Rell, signed a law in 2005 that legalized same-sex civil unions. In a 4-3 decision, the state Supreme Court legalized gay marriage, finding that marriage and civil unions were not equal.

Anyone interest in adoption should call 888-KID-HERO or visit CTFosterAdopt.com.