Malloy says many accept mass shootings rather than gun control 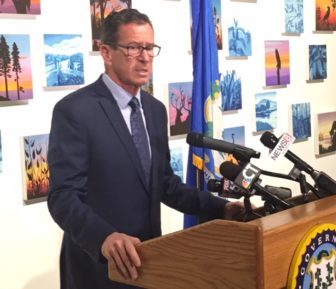 Gov. Dannel P. Malloy says he refuses to be shocked by the Texas shootings.

The shooting deaths of 26 worshippers Sunday at a church in Sutherland Springs, Tex., are a price many Americans are willing to pay before accepting limits on their ability to purchase and own firearms, Gov. Dannel P. Malloy said Monday.

The shootings in Texas echoed in Connecticut, claiming the identical number of victims killed nearly five years ago at the Sandy Hook elementary school in Newtown. The killers in Texas and Connecticut each used a version of the AR-15, a magazine-fed, semiautomatic rifle that fires ammunition used by the U.S. military.

In response to Sandy Hook, Connecticut banned the sale of large-capacity magazines and versions of the AR-15, one of the best-selling firearms in the U.S., that fire .223-caliber rounds, allowing only weapons configured to fire less-powerful .22-caliber ammunition.

The state’s Supreme Court next week will hear arguments over whether a Superior Court judge properly dismissed a lawsuit by 10 Sandy Hook victims’ families against the the maker and sellers of the Bushmaster AR-15 used at the school. The suit attempts to place on trial the question of whether the AR-15 should be available to civilians.

Malloy refused to be shocked Monday by what happened in Texas. He recalled that his reaction 48 hours after Sandy Hook was that the mass shooting was not the first in the U.S, nor would be it be the last.

“That’s what we’re seeing play out — in Nevada, in Texas, in Florida, in California,” Malloy said. “It’s coming to your neighborhood.”

Scott Wilson, a voice for gun owners as the co-founder of the state’s largest gun group, the Connecticut Citizens Defense League, objected to the governor’s characterization of gun owners as valuing the right to purchase firearms over the lives of their children. 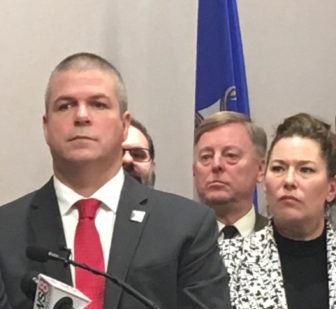 Scott Wilson with Republican legislators at a news conference in February protesting a proposal to sharply increase pistol permit fees.

“I do think that people are not going to let their rights be taken away from them with the promise of safety by government officials,” Wilson said. “I think people realize the police can’t be everywhere.”

Authorities identified the killer as Devin Patrick Kelley, 26, the recipient of a bad-conduct discharge by the Air Force after serving a year in a military prison for a conviction on charges of physically abusing his wife and child. CNN has reported that he purchased the Ruger AR-15 from a gun shop, raising questions about whether his military conviction had been entered into the federal criminal background system.

The Air Force later confirmed that it failed to enter the conviction into the data base. Wilson said Congress should focus on ensuring the current system works before considering new controls on guns.

Had the killer been denied the purchase of a firearm, Wilson said, he still could have attacked the church and its occupants, who ranged in age from 18 months to 75 years.

“I don’t think, if he couldn’t purchase a gun over the counter, that would have stopped him,” Wilson said. “He probably would have used a straw purchaser, firebombed the church or driven a truck through it.”

Wilson said he was dismayed, though not surprised, that the state’s two U.S. senators, Democrats Richard  Blumenthal and Chris Murphy, were quick to suggest the need for legislation by Congress, rather than wait to see if existing laws were followed.

“None of this is inevitable,” Murphy said in a statement. “I know this because no other country endures this pace of mass carnage like America. It is uniquely and tragically American. As long as our nation chooses to flood the county with dangerous weapons and consciously let those weapons fall into the hands of dangerous people, these killings will not abate.”

Blumenthal said at a press conference in Hartford that he and other lawmakers are eager to learn whether Kelley’s court-martial record was entered into NICS, the National Instant Criminal Background Check System, and if not, then why not.

Congress need not wait, however, to reconsider its long-standing reluctance to require universal background checks for the purchase of firearms or other safeguards that would not infringe of the constitutional right to own firearms, Blumenthal said.

Blumenthal also has introduced a bill in Congress that would prevent domestic abusers under temporary restraining orders from legally obtaining weapons, a step Connecticut already has taken.

“My heart and prayers go out to the loved ones of these families but prayers are not enough. and now is the time for action,” Blumenthal said. “Congress has been complicit in these kinds of mass shootings.”