Legislators to return for limited revisions to bipartisan budget 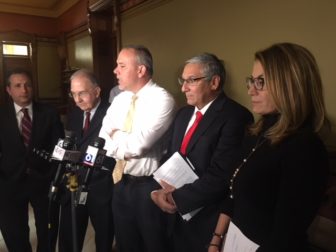 Legislative leaders agreed Thursday to call lawmakers back to Hartford next week to revise, but not “re-litigate” the bipartisan budget passed last month, primarily by changing the terms of what Gov. Dannel P. Malloy complained was a flawed hospital provider tax that could cost Connecticut hundreds of millions of dollars in federal Medicaid reimbursements.

The Senate and House sessions next week will provide a modest coda to one of the General Assembly’s longest struggles to finalize a budget, approaching a 1991 battle that was not completely resolved until December, when exhausted legislators gave up trying to repeal the broad-based income tax adopted four months earlier.

The Senate tentatively is scheduled to vote Tuesday morning to correct flaws in the hospital tax, a rental housing rebate program, an income tax deduction related to Social Security and a bonding issue identified by the treasurer’s office. The House of Representatives will return Wednesday, closing the books on a legislative season in its fifth month of overtime.

Democratic and Republican leaders agreed on a limited agenda during a 90-minute meeting, a signal to rank-and-file lawmakers and interest groups not to treat the session as an opportunity for a broader debate on the compromise budget passed Oct. 26 on votes of 33-3 in the Senate and 126-23 in the House.

“I think we all agreed to keep it limited,” said House Speaker Joe Aresimowicz, D-Berlin.

Funding for CT-N, the state-owned public affairs network whose non-profit operator ceased operations after an unexpected 50 percent budget cut, will not be addressed, nor will other controversial measures, including a limit on the ability of the State Elections Enforcement Commission to investigate complaints against lawmakers and other candidates.

The Connecticut Public Affairs Network, the non-profit operator of CT-N since its inception in 1999, ended its operations a week ago after protracted negotiations over the legislature’s bid to more tightly control programming and, more recently, a stunning budget cut imposed without consultation with network officials.

CT-N never ceased broadcasting, but its coverage of live events largely ceased while the Office of Legislative Management tried to hire some of the network’s laid-off employees as temporary legislative employees. Legislators say they eventually will advertise for a new private operator of the state-owned cable channel and web site.

Malloy signed the budget on Oct. 31, but used his line-item veto to stop implementation of the hospital provider tax, saying the language was flawed and would not pass muster with federal officials. The legislature had declined to accept his suggested revisions before passage.

The hospital tax is a complex legal and fiscal maneuver designed to increase federal  Medicaid reimbursements to the state. Every state but Alaska imposes some form of a health provider tax.

Such taxes authorize collecting and redistributing revenue from hospitals, nursing homes and other providers of health services. In most cases, the cost of the tax is paid back to providers through an increase in the Medicaid reimbursement rate for their patient treatment and services. Such maneuvers yield greater federal funds, since Medicaid is jointly funded by the states and the federal government.

The Connecticut tax would apply to hospitals and ambulatory surgery centers.

Technically the state’s tax on hospitals would rise from $556 million to $900 million per year. Connecticut would redistribute those funds and return them to the industry — plus about $229 million more — qualifying the state for a big boost in federal aid. The net effect on the state budget would be a $137 million annual gain in revenue.

The Connecticut Hospital Association said it agreed with the administration on the new language.

The Malloy administration also said language relating to a rental rebate program was flawed. It moved administration of the program from the state Office of Policy and Management to municipalities, while leaving $13 million in funding for the program at OPM with no legal way to distribute the money.