Sandy Hook families get day in court on claims against gunmaker 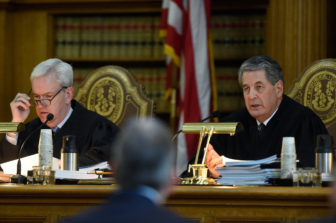 Justices of the Connecticut Supreme Court aggressively questioned a gunmaker’s lawyer Tuesday about the marketing of the AR-15 rifle used to kill 26 children and educators at the Sandy Hook School in 2012, giving families of the victims hope the court will revive their liability claims against Remington Arms that were dismissed by a trial judge.

The questions came during oral arguments in an appeal that asks the state’s highest court to broaden the definition of negligence and allow a trial to see if the manufacturers and distributors of firearms can be held liable for the criminal use of the AR-15, a magazine-fed semiautomatic rifle with military origins and a booming civilian market.

The plaintiffs, who were deemed by a lower court to have no valid legal claims against the defendants, were careful to draw no conclusions from the justices’ questions in a case that tries to overturn long-held assumptions about the legal protections afforded to the firearms industry by state and federal law.

“I think the only inference we can draw is that this is a court that is taking its job very seriously. It was written all over their questions,” Joshua Koskoff, the lawyer for the plaintiffs, said after the hearing. “Just to see the state’s highest court take this case so seriously is tremendously comforting.”

If the court revives the case, the plaintiffs’ lawyers would attempt to use pre-trial discovery to compel gunmakers to release documents about what Remington believed about the ultimate civilian market for the AR-15 and its appeal to Adam Lanza, the 20-year-old responsible for the assault on the Sandy Hook elementary school.

The case was brought by a teacher who survived the attack and the families of nine children and adults who died. 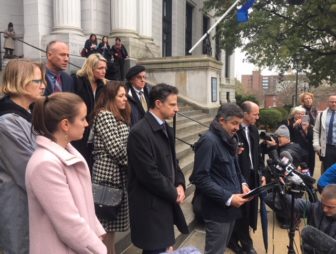 Ian Hockley, the father of a boy killed at Sandy Hook, addresses reporters after the hearing. To his right, Joshua Koskoff, the families’  lawyer.

Precedent and federal law are against them, specifically the Protection of Lawful Commerce in Arms Act, passed by the Congress and signed into law by President George W. Bush in 2005. Plaintiffs claim they can prove liability under the Connecticut Unfair Trade Practices Act and under the common-law principle of “negligent entrustment.”

James B. Vogts, the lawyer for Remington, told the justices that the plaintiffs were attempting to use a tragedy to rewrite negligent entrustment, which historically has applied only to defendants who knew or could reasonably be expected to have known they were entrusting a dangerous product to an unfit person.

“The law needs to be applied dispassionately,” he said.

Justice Richard Palmer, the senior justice who presided over the session, interrupted Vogts less than two minutes into his argument, asking if the law needed to adapt with the times.

“I do agree generally that the law needs to adapt,” Vogts said.

“They are saying the law as applied for 100 years should be abandoned,” Vogts replied. 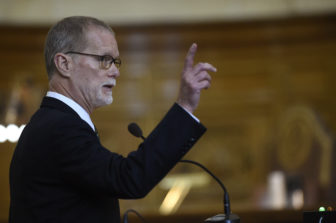 James Vogts, the lawyer for Remington.

In an amicus brief, lawyers who defend companies against liability claims said that the broader definition sought by the plaintiffs would be disastrous to businesses in Connecticut.

Vogts said the plaintiffs are trying to distort liability law, not adapt it. Firearms manufactured by Remington are sold to distributors and retailers, not the general public; in no way can Remington be judged negligent for what happens after the legal sale of its produce, when it plays no role in making that sale, he said.

“You can’t maintain a negligent entrustment claim against the non-seller of a product,” Vogts said.

Vogts cautioned the justices against reshaping the law to meet the circumstances of a tragedy. He pointed out the window at the State Capitol and said that was a job for the General Assembly, where one of the justices, Andrew McDonald, once wrote laws as a co-chair of the Judiciary Committee.

Koskoff is trying to convince the court that Remington never sold a firearm to the killer, Adam Lanza, a 20-year-old who was obsessed with mass shootings, but the company and the AR-15 nonetheless played roles in the planning and execution of Lanza’s assault on an elementary school.

“Remington may never have known Adam Lanza, but they had been courting him for years,” Koskoff told the justices. “The relationship between Remington and Adam Lanza is at the heart of this case.”

In 2006, Koskoff said, Remington Outdoor Co., the owner of Remington Arms, began buying up AR-15 makers like Bushmaster, the maker of the weapon legally purchased by Lanza’s mother, Nancy, from the Riverview gun shop, which has since gone out of business. The weapon was aggressively marketed to a civilian market, stressing its military origins and combat capabilities.

“The uncompromising choice when you demand a rifle as mission-adaptable as you are,” Remington said in one ad promoting the AR-15. In another, it boasted,  ”Forces of opposition bow down — you are single-handedly outnumbered.”

McDonald, a former state senator who was the legal counsel to Gov. Dannel P. Malloy when Connecticut expanded gun controls in response to the Sandy Hook massacre, asked Vogts what Remington was saying when it advertised that ‘the forces of opposition bow down” when faced with an AR-15?

Vogts said commercial speech was protected by the First Amendment, and some of the advertising was directed to the military market.

Palmer questioned both the marketing of the rifle and its “need” in the marketplace.

“This kind of rifle is owned by millions of Americans across the country” for hunting, target shooting and home defense, Vogts said.

Palmer asked what was the legitimate use of 30-round magazines like the ones used by Lanza?

“It’s simply a convenience at the target range,” Vogts said.

Chief Justice Chase T. Rogers, who is retiring in February, took herself off the en banc panel of seven justices. Justice Gregory T. D’Auria recused himself. Until his nomination in February, he oversaw the appellate office of the attorney general’s office, which filed an amicus brief in the case.

On the panel with Palmer and McDonald were Justices Raheem Mullins, Richard A. Robinson, Maria Araujo Kahnn, Senior Justice Christine S. Vertefeuille and Nina F. Elgo, an appellate judge designated to sit in the case. Kahn and Robinson were not available to attend the hearing and will make their decisions after listening to the audio.

Families of the victims sat in the packed courtroom. They gathered on the courthouse steps after the arguments.

Ian Hockley, whose son, Dylan, was among the 20 first-grade students killed at Sandy Hook, spoke on their behalf with Koskoff on the court steps, telling reporters the families have “infinite patience” to pursue their claims.