At his confirmation hearing, Mick Zais, the nominee to be second-in-command at the Department of Education, said that he was not aware of high-profile studies showing that school vouchers can hurt student achievement. 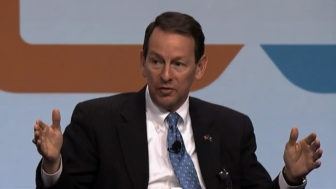 It was a remarkable acknowledgement by Zais, who said he supports vouchers and would report to Education Secretary Betsy DeVos, whose signature issue has been expanding publicly funded private school choice programs.

The issue was raised by Minnesota Sen. Al Franken, who asked whether Zais, who was previously the South Carolina schools chief, was “aware of the research on the impact of vouchers on student achievement.”

He replied: “To the best of my knowledge, whenever we give parents an opportunity to choose a school that’s a good fit for their child, the result is improved outcomes.”

Franken responded, “No, that’s not true. The academic outcomes for students who used vouchers to attend private school are actually quite abysmal.”

Franken proceeded to mention recent studies from Louisiana, Indiana, Ohio, and Washington, D.C., that showed declines in test scores after students move to private schools with a voucher.

Zais responded: “Senator, I was unaware of those studies that you cited.”

Franken then asked if Zais’s initial response expressing confidence in school choice was anecdotal, and Zais said that it was.

What’s surprising about Zais’s response is that these studies were not just published in dusty academic journals, but received substantial media attention, including in the New York Times and Washington Post (and Chalkbeat). They’ve also sparked significant debate, including among voucher supporters, who have argued against judging voucher programs based on short-term test scores.

Meanwhile, it’s worth noting that the research confusion was a bipartisan affair at Wednesday’s confirmation hearing.

Although Franken, who referred to a New York Times article on voucher research in his question, was broadly accurate in his description of the recent studies, he said that a D.C. voucher study showed “significantly lower math and reading scores;” in fact, the results were only statistically significant in math, not reading.

Franken also did not mention evidence that the initial negative effects abated in later years in Indiana and for some students in Louisiana, or discuss recent research linking Florida’s voucher-style tax credit program to higher student graduation rates.

In a separate exchange, Washington Sen. Patty Murray grilled Jim Blew — the administration’s nominee for assistant secretary for planning, evaluation, and policy development — on the performance of Michigan’s charter schools. Murray said that DeVos was “one of the architects of Detroit’s charter school system,” describing the results as “disastrous for children.”

(Murray may be referring to an Education Trust analysis showing that Michigan rankings on NAEP exams have fallen relative to other states. The study can’t show why, or whether school choice policies are the culprit, as some have claimed.)

Blew answered: “The most reliable studies do show that the charter school students in Detroit outperform their peers in the district schools.”

Murray: “I would like to see that because that’s not the data that we have.”

Blew: “I will be happy to get if for you; it’s done by the Stanford CREDO operation.”

Murray: “I’m not aware of that organization.”

CREDO, a Stanford-based research institution, has conducted among the most widely publicized — and sometimes disputed — studies of charter schools. The group’s research on Detroit does show that the city’s charter students were outperforming similar students in district schools, though the city’s students are among the lowest-performing in the country on national tests.