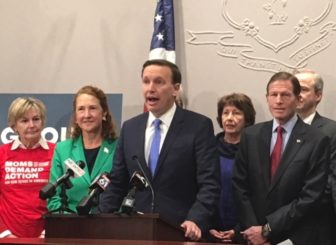 Washington – Rep. Elizabeth Esty, usually at odds with gun rights groups over firearms legislation, is promoting a bill that the National Rifle Association likes too.

Esty, D-5th District, is a co-sponsor of the U.S. House version of the “Fix NICS Act of 2017,” legislation that aims to prevent individuals like the shooter in Sutherland, Texas, from slipping through the cracks of the federal gun-buyer background check system.

Unlike other gun-related bills backed by Esty, the vice chair of the House Gun Violence Prevention Task Force, this one has the support of the NRA and other gun rights groups. And unlike other gun bills introduced by Connecticut’s Democratic lawmakers since the Newtown massacre nearly five years ago, the Fix NICs bill has  Republican sponsors, Reps. John Culberson, R-Texas, and Ryan Costello, R-Pa.

“I don’t know whether this is a turning point, but it is significant that Republicans are now willing to join Democrats in making some pretty significant improvements to the background checks system,” Murphy said at a press conference in Hartford with Blumenthal and Esty on Monday. “This is potentially a foundation upon which we can build a bipartisan compromise.”

Cornyn is the second-ranking Republican in the Senate GOP hierarchy, and his effort to strengthen the National Instant Criminal Background Check System, or NICS, drew praise from the NRA.

“We applaud Sen. John Cornyn’s efforts to ensure that the records of prohibited individuals are entered into NICS, while providing a relief valve for those who are wrongly included in the system,” said Chris Cox, NRA executive director. “The NRA will continue to support efforts to make the background check system instant, accurate and fair, while protecting the rights of law-abiding gun owners.”

Esty said, “Our proposal demonstrates that we can find ways to work together to protect our families while respecting the Second Amendment.”

The Fix NICS bill would not expand the federal background check system beyond purchases made by registered dealers in stores and gun shops. It would continue to allow sales by individuals on the Internet and at gun shows to be exempt from the system.

The bill instead reinforces the requirement that federal agencies report all infractions to NICS, and creates a financial incentive for states to do so as well.

The bill also has a “stick.” It would withhold bonuses and overtime pay from political appointees who head agencies that aren’t fully compliant in their reporting of information to NICS.

Texas shooter Devin Kelly, who killed 26 people in a small church near San Antonio, is a prime example of a failure of the existing gun background check system, which prevents the sale of firearms to a number of people. Those include people convicted of a crime or misdemeanor punishable by more than one year in prison, those with misdemeanor convictions for abusing a domestic partner or child, and those who are involuntarily committed to a mental institution.

Kelly escaped from a mental health facility in 2012 after he was caught sneaking guns onto an Air Force base and “attempting to carry out death threats” made against military superiors.

Kelly also spent 12 months in a military prison for assaulting his then-wife and stepson and received a bad-conduct discharge. But the Air Force never reported those charges to the NICS system.

Esty said she was in Newtown on Sunday to swear in new local officials and to thank Patricia Llodra, who did not seek re-election as first selectman, for helping to lead the community in the wake of the Sandy Hook massacre.

“It’s been a really tough couple of weeks for the Sandy Hook families,” Esty said, a reference to the approaching five-year anniversary of the Newtown shootings last month.

Like Blumenthal and Murphy, Esty said she was struck by the broadening base in Congress for stronger background checks. An example of the growing support, Esty said, is that the main sponsor of the House Fix NICS bill is Rep. Henry Cuellar, a Texas Democrat whose district includes Sutherland Springs and who has an “A” rating from the NRA.