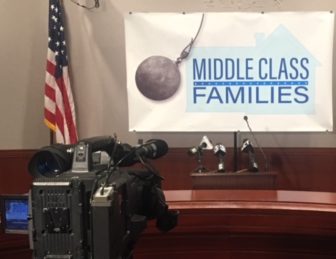 Senate Democrats teed up their press conference with a graphic.

Democrats introduced President Trump and federal tax policy as issues in the 2018 race for control of the General Assembly on Tuesday with a withering dissection of how tax plans crafted by the Trump administration and Republicans in Congress would hit middle-class families in Connecticut.

A Republican leader quickly countered that GOP legislators are focused on a more relevant budget issue: How Democratic legislators respond to the cuts in state aid to municipalities made this week by Gov. Dannel P. Malloy to close a budget gap, a task left to the discretion of the governor under a bipartisan budget deal.

The sharp exchanges provided a preview of a 2018 campaign season that is arriving early in Connecticut, competing with Washington politics and the coming holidays for the attention of voters.

“The national Republican tax plan would give huge windfalls to the super-rich, while Connecticut’s residents would be forced to pick up the bill,” said Senate President Pro Tem Martin M. Looney, D-New Haven, accompanied by five other members of the state Senate at a press conference in Hartford.

Connecticut has no Republican representatives in Congress, but Democrats said the state GOP needs to answer for the national Republican vision of tax reform. Asked how Democrats would make that case, Senate Majority Leader Bob Duff, D-Norwalk, stepped to the microphone, but before he could speak, Looney prompted laughter by replying in a stage whisper:

Duff and Looney were accompanied by a cross-section of the Democratic caucus in the evenly divided state Senate, including Sen. Paul Doyle of Wethersfield, one of the Democrats who sided with Republicans to block passage of a Democratic budget. They stood before a graphic backdrop depicting a wrecking ball headed toward a house labeled, “MIDDLE CLASS FAMILIES.” 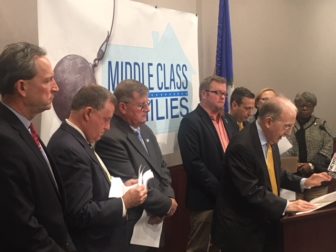 “It comes down to whether or not the Republicans of the General Assembly support the Trump tax cuts,” Duff said. “While they may not have a vote on these tax cuts, it comes down whether they support the Trump tax cuts. And are they using their bully pulpit the way that we’re using our bully pulpit to sound the alarm on what this will do to our state?”

The U.S. House and Senate have produced differing tax bills.

The House bill would eliminate deductions for state taxes, medical expenses, and interest on student loans and cap the deduction for local property taxes at $10,000, a blow to high-tax states like California, Connecticut, Massachusetts, New Jersey and New York.

Senate Republican leader Len Fasano of North Haven, who says he still is assessing the impact of the GOP tax changes on Connecticut, dismissed the Democrats’ outrage at Washington.

Fasano said Republicans will not shy from a debate about who and what are more relevant to politics at the State Capitol: Trump or Malloy; federal tax policy or Connecticut’s budget.

“Let Washington do the Washington thing,” Fasano said. “If Democrats ignore their duties here at home, then they’ll hear about that in 2018.”

Democratic and Republican leaders of the General Assembly are scheduled to meet next week to discuss whether lawmakers should return in special session to revise the budget in response to Malloy’s cuts or his assertion that the state budget already is running a shortfall of more than 1 percent, the trigger for adoption of a deficit-mitigation plan.

Fasano said Malloy has pushed the projected deficit over the 1-percent mark by claiming costs not previously asserted in budgets: $15 million in legal costs tied to settling the lawsuit filed by state employee unions over layoffs ordered in 2002 by then-Gov. John G. Rowland, and $10 million related to federally mandated staffing and services in the state Department of Children and Families.

The Republican leader said Malloy, shut out of the final budget compromise, now was undermining the legislature’s work.

“Why would he do that? It’s got to be ego,” Fasano said. “He cannot stand the fact the legislature did it without him. Why would you do that? It’s a question I’ve been pondering from day one.”

Kelly Donnelly, a spokeswoman for Malloy, said the suggestion the administration inflated the numbers was “preposterous.”

Correction: The House has passed its tax bill; the Senate has not. An earlier version of this story incorrectly referred to the two chambers passing, not just producing, separate tax bills.