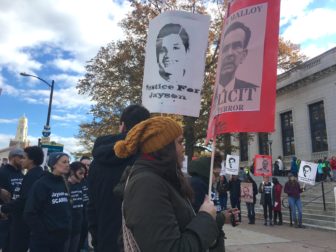 The state Bond Commission is poised to approve $1.8 million Wednesday to reimburse 14 police departments for the cost of body cameras and video storage devices as part of an effort to improve police transparency and community confidence.

That effort accelerated in the last legislative session with legislation that provided grants for the purchase of equipment and set up a task force to examine issues surrounding its use, including training, data storage and freedom of information questions.

The Bond Commission is set to act two days after dozens of activists and protesters gathered near the Connecticut Capitol on Monday to draw attention to a fatal police shooting that left an unarmed Bridgeport teenager dead.

Bridgeport police officer James Boulay shot and killed 15-year-old Jayson Negron in a stolen car in early May. Police have said he threatened the officer with the car. The teenager’s death sparked protests in Bridgeport.

Police have neither body camera nor dashboard camera video of the shooting, but Bridgeport Police Department spokesman Av Harris said the department plans to aggressively pursue state funding for such equipment. 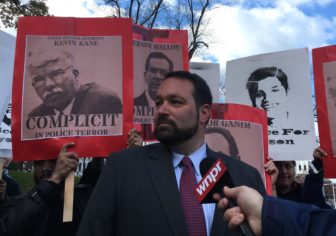 During Monday’s rally, chants of “justice for Jayson” erupted as supporters demanded the release of surveillance video from a nearby drug store and for State’s Attorney Maureen Platt to charge Boulay with murder. Boulay is on paid administrative leave.

Jazmarie Melendez, Negron’s 19-year-old sister, accused authorities of lying and covering up what really happened. Melendez said her brother was murdered and left on the ground for 20 minutes without medical attention.

“I think my brother had no intent to hurt any officer and they are doing that simply to defile his character,” Melendez said.

Platt said the Connecticut State Police are still investigating the incident, but she anticipates they will finish this week and meet with her Monday.

“Depending on my review of their investigation and our discussion on Monday, I may or may not request additional work be done on this matter,” Platt said in an emailed statement. “I then must thoroughly review all applicable documents and videos and will then, and only then, reach a conclusion.”

Harris said he understood the protestors’ frustration. “…We understand that it’s taking a long time to get to this, but we will get to the bottom of it,” he said. 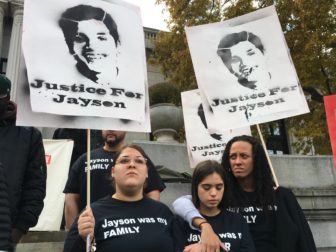 Jazmarie Melendez, center, stands with friends at a rally for her brother, Jayson Negron.

The state’s Criminal Justice Policy and Planning Division said 23 municipal police departments have applied for the reimbursement grant program. Mike Lawlor, the undersecretary who heads the office, said most police departments have not yet implemented body cameras, citing logistical issues such as storing all of the video and dealing with privacy concerns.

New Haven recently purchased 800 body cameras, enough for each officer to have one for their shift and a backup. Other departments slated to receive grants are Bloomfield, Darien, Eastern and Western Connecticut State universities, Groton, Middlebury, Milford, Naugatuck, North Haven, Orange, Putnam, Wilton and Wolcott.

“(The grants) work to take away the excuse that ‘we don’t have the money to acquire body cameras’,” Lawlor said. “I think there’s definitely a reluctance on a number of police departments to do this, there’s no question about it.”

Farmington Police Chief Paul Melanson said the long-term costs associated with storing the video is a principle concern among police forces. He said they also worry the technology is still in its early stages and probably will progress in a few years.

“Some agencies probably have an issue with personnel accepting it, but I think the great majority are looking at, once you initiate a program like that, you are in it for the long haul,” Melanson said.

Lawlor said some officers “just can’t wrap their heads around the idea that all their actions will be caught on video.”

“Part of the job is complete transparency and … when communities have confidence in their police department crime goes down,” Lawlor said.