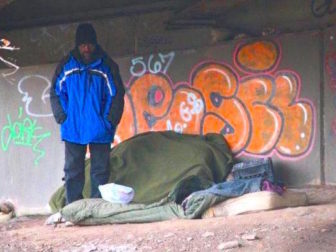 Sleeping arrangements for a homeless man under I-84-East in Hartford last winter.

A housing advocacy group said Thursday Connecticut continues to make progress on reducing homelessness and credited a statewide coordinated effort by both advocates and officials. Eventually the goal is to eliminate chronic homelessness.

The assessment by the Partnership for Strong Communities states the number of Connecticut residents experiencing homelessness during 2016 fell to 10,083, a five-year low and an 8 percent decrease from 2015.

That drop reflects the state’s commitment to tackle homelessness and provide affordable housing in the past seven years, said the group’s policy director, Sean Ghio.

“Gov. Malloy and the legislature in that time have really devoted a lot of investments to the creation of affordable housing, which wasn’t happening before then,” Ghio said.

According to the Connecticut Department of Housing, nearly 10,000 affordable housing units have been built since 2011, and another 3,286 are under construction. There are also funding commitments in place to create about 5,200 more.

Having a stand-alone housing department and funding to support those efforts is a key component, state Housing Commissioner Evonne Klein said.

“What we’re finding is when folks are exiting homelessness, they’re putting down roots, keeping a job and contributing to local communities,” Klein said.

The chronically homeless include those who have a disabling condition and have been homeless either long-term or repeatedly. They represent a much smaller population of the homeless, and the state has had “success with creating a system to handle intake and really track and understand the needs of these people,” Ghio added.

Malloy’s administration succeeded in effectively ending homelessness among veterans in Connecticut last year, becoming the second state to do so after Virginia.

In a survey of housing costs, the group found that Connecticut renters taking on housing costs exceeding 30 percent of their income fell slightly to 48 percent from 49 percent in 2015.

Though median monthly housing costs declined two percent to $1,366, they remained the sixth highest in the nation. More than 10 percent of the housing stock was considered affordable in only 31 of the state’s 169 cities and towns.

“The housing is too unaffordable for too many people,” Ghio said. “For selfish reasons the state should look at it as an anchor on the economy because, for every dollar you spend on housing, you don’t spend it on something else.”