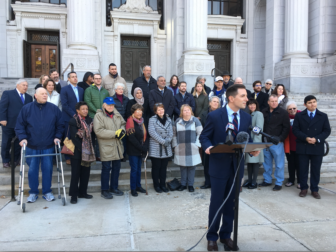 Chris Mattei formally entered the race for attorney general Monday with an appeal to the Democratic base by promising in prepared remarks to be “unflinching” in taking on Wall Street banks, pharmaceutical companies, energy companies and others who unfairly disadvantage consumers.

His announcement in Hartford on the steps of the Connecticut Supreme Court ends months of an exploratory campaign for governor and begins an effort to win the Democratic nomination to succeed George Jepsen, a Democrat who stunned the party by announcing last week he would not seek a third term.

“His record of standing up for families and taking on concentrated corporate power has been remarkable,” Mattei said of Jepsen. “He was preceded by another tireless advocate for Connecticut’s families, Sen. Richard Blumenthal, who I greatly admire.”

Standing before 30 supporters, Mattei showed he would join other Democrats in using President Trump to energize Democrats, saying the president has empowered corporate interests and pursued polices that threaten the environment, health care, the rights of working people, and the middle class.

His prepared remarks, however, were tougher on Wall Street and big business than his delivered speech.

“The people of Connecticut will need a new lawyer, Mattei said in a text given to reporters. “They will need a lawyer who will be unflinching in taking on those who have amassed massive power and have used that power to their unfair and unlawful advantage — Wall Street banks, pharmaceutical companies, energy companies and more.”

But when he spoke he skipped the reference to Wall Street and specific industries.

He is the first Democrat since Jepsen’s announcement to open a candidate committee. Rep. William Tong, D-Stamford, the co-chair of the Judiciary Committee, opened an exploratory committee that allows him to raise money for any statewide constitutional office.

Mattei chose a “dreamer” to introduce him. Jonathan Gonzalez-Cruz, an undocumented student at Southern Connecticut State University, introduced Mattei and said those in the Deferred Action on Childhood Arrivals program need people like Mattei to stand with them.

“We were offered a lifeline by the Obama administration to stay here in our homes,” Gonzalez-Cruz said. “But now, that is threatened by President Donald Trump — his move to end the DACA program is a violation of the promise that was made to me and to others like me, that if we worked hard and played by the rules, we could stay.”