Washington –  Undocumented youth in Connecticut are asking the state’s U.S. senators to reject any federal budget bill that does not contain protections for the Deferred Action for Childhood Arrivals – or DACA program recipients.

Since President Trump in September ended former President Barack Obama’s practice of using the White House’s authority to protect immigrants who came to this country illegally with their parents as infants and children, Congress has debated several fixes to help the youths known as “dreamers.”

The most generous is the DREAM Act, which would give legal status to immigrants who have entered the United States before the age of 18 and have lived here for at least four years before the bill’s enactment. After five years as a legal permanent resident, applicants could apply for citizenship.

Both Sens. Richard Blumenthal and Chris Murphy support the DREAM Act, but they have not promised to reject a budget bill that did not include the legislation. 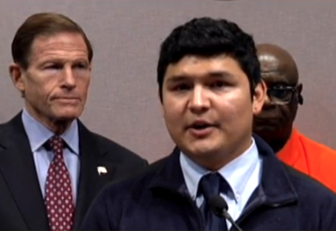 Connecticut dreamers hope they do take that vow, and become “dream heroes.” Until now, only Sens. Elizabeth Warren, D-Mass.; Bernie Sanders, I-Vt.; and Kamala Harris, D-Calif., have promised to vote against a budget bill that does not protect dreamers, but would avoid a government shutdown on Dec. 22, the day the current federal spending authority runs out.

“We believe that any vote on a spending bill that does not include a DREAM Act is a vote for deporting thousands of immigrant young people,” said Camila Bortolleto, a DACA recipient and founder of CT Students for a Dream.

At a press conference with Bortolleto in Hartford on Monday, Blumenthal said “ongoing” negotiations about the DACA kids have given him “reason for hope,” and that he’s optimistic a bipartisan agreement can be reached by Dec. 22, when Congress is scheduled to break for the holiday. That day is also the deadline for passing a new budget.

“Congress must provide protections for the dreamers before it leaves for recess,” Blumenthal said.

There is a reason for the sense of urgency.

When Trump made his announcement in September, he allowed DACA recipients whose renewable conditional residency permits were soon to expire to renew them for one year. But starting March 6, the protections will begin to end for about 700,000 DACA recipients, about 8,000 of them in Connecticut.

Right now, youth who didn’t or couldn’t renew their DACA permits are vulnerable to deportation.

Bortolleto predicts more than 120 become deportable each day, and those numbers will increase sharply in March.

Blumenthal said Trump has thrown “a timebomb” at Congress. “And that timebomb is ticking,” he said.

Murphy recently tweeted “an estimated 11,061 #DACA recipients have already lost their protection. It’s time for Congress to pass the #DreamAct and provide a permanent solution for dreamers.”

A spokeswoman for Murphy said the senator has not made up his mind on how he’ll vote on the bill because a final bill is not available.

To qualify for protections under the DREAM Act, applicants also must have been admitted to a college, university or other institution of higher learning, earned a high school diploma or general education development (GED) certificate, or are currently enrolled in a secondary education program and seeking a diploma or GED certificate. Applicants must also be free of convictions for certain criminal offenses.

Other bills under consideration are less generous and have tougher requirements.

The Recognizing America’s Children Act, sponsored by Rep. Carlos Curbelo, D-Fla., would provide a pathway to citizenship after 10 years.

The RAC Act, and all other legislation aimed at helping dreamers, contains all the requirements of the DREAM Act, including an extensive background check. But the RAC Act would apply an additional restriction: applicants must have arrived in the United States at age 16 years or younger and have lived here since January 1, 2012.

Another GOP-sponsored bill, called the BRIDGE Act, would not provide a path to citizenship. It is a three-year visa program which would have to be renewed by Congress and, unlike the Dream Act or the RAC Act, would not allow applicants to travel outside the United States.

To qualify, BRIDGE Act applicants must have entered the United States before they were 16 years old and lived in this country since June 15, 2007.

The SUCCEED Act also is supported by some congressional Republicans but is a little more generous.

It would allow an applicant to apply for citizenship after 10 years as a conditional permanent resident and five years as a green card holder. International travel would be allowed under the bill, but applicants must have entered the United States before the age of 16 and be younger than 31 on June 15, 2012. They must have lived continuously in the United States since Jan. 1, 2012.

Key congressional Republicans are willing to advance legislation that would protect undocumented youth, but want it coupled with stronger border protections, although not necessarily Trump’s border wall with Mexico.

Sen. Charles Grassley, R-Iowa, the chairman of the Senate Judiciary Committee, said any fix for DACA also must include “robust border security.” 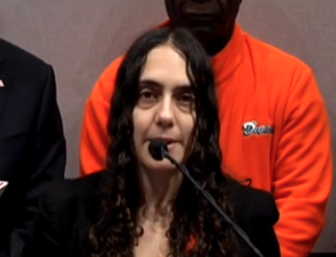 “Of course, tactical infrastructure, like fencing, is part of the answer,” as are technology and funding for additional immigration officers, Grassley said.

“We’ve got to make sure that any deal includes meaningful interior enforcement,” he said.

“I don’t want to trade my own safety at the risk of my parents,’” he said.

Gonzalez hopes to graduate in May with degrees in economics and mathematics, but said his diploma would be worthless a year later if Congress fails to act because he would lose his ability to work in the United States and be vulnerable to deportation.

Nearly 200 dreamers and their supporters were arrested at the U.S. Capitol last week during a demonstration for the DREAM Act.

Carolina Bortolleto, Camila’s twin sister, said a similar demonstration in Washington, D.C., next week, with about 50 protesters traveling on a bus from Connecticut for a day and a van of 15 others staying in the Nation’s Capital for several days to urge Congress to act quickly.

“We are just going to take over D.C.,” Carolina Bortolleto said.

Like her sister, Carolina believes “the best chance for the DREAM Act is attaching it to a must-pass spending bill.”

Meanwhile, it could be up to Senate Democrats like Blumenthal and Murphy to decide whether to make protections for DACA recipients a condition of their support for the spending bill or punt the issue to next year.

There are questions about whether Democrats will insist DACA be included in the list of year-end spending priorities because there are a host of other issues that must be dealt with – including funding authorization for community health centers and the Child Health Insurance Program and additional funding for disaster relief.