Board of Regents votes to consolidate all 12 community colleges 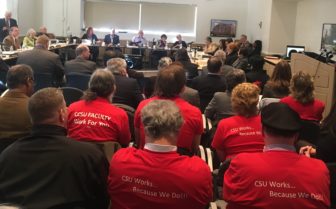 Community college faculty members in red t-shirts listen to a colleague speak against the consolidation.

The governing board of the state’s 12 community colleges voted Thursday to advance a controversial plan intended to merge the schools into a single accredited institution, despite fervent opposition from faculty and students who attended the meeting.

Faculty clad in bright red shirts emblazoned with “CSU Works…Because We Do!!!” took turns objecting to the plan, as the packed audience repeatedly clapped loudly. Some community college students also spoke to oppose the proposal, which aims to shed nearly 190 people in top administrative positions by 2021.

The Connecticut Board of Regents’ endorsement leaves Mark Ojakian, president of the Connecticut State Colleges and Universities (CSCU) system, one step closer to rolling out the plan in July 2019. He now will seek approval from the schools’ accrediting institution, the New England Association of Schools and Colleges.

The regents oversee the CSCU system, which includes the community colleges, the four regional state universities and the online Charter Oak College. They backed the community college consolidation in response to mounting pressure to save money because of declining enrollment and reductions in state funding.

Twelve board members voted in favor of the measure, while William McGurk abstained.

The proposal would create the nation’s fifth-largest community college with about 56,000 students. The plan would not close any campuses or cut faculty or student support functions, such as advisors and counselors.

Still, faculty and students raised various concerns. Campuses would lose their autonomy, personal fabric and community connections, they said. Both were concerned student services would suffer, and they would have a harder time securing scholarships and financial aid.

“You’ve been told repeatedly ‘we can’t afford not to act’,” faculty member Stephen Cohen of Central Connecticut State University said. “If you allow this plan to go forward without real answers to the questions that we’ve put before you, not just assurances but real answers backed by evidence … the cost of running the current system will pale in comparison to fixing what you will break.”

“If you break this system, the state of Connecticut can’t afford to buy it, and it will be students that suffer first,” Cohen said.

Ojakian says he would save about $28 million annually by cutting out each institution’s president, budget staff and other administrative positions, and forming an integrated staff for all of the community colleges.

The CSCU president has maintained the plan will help the system provide better services for students and allow officials to prioritize where to spend available resources.

But nearly all those who spoke against the consolidation told the board to give it more careful consideration and go back to the drawing board.

Central Connecticut State University professor David Spector expressed disbelief that Ojakian and his staff created the plan based on their own analyses rather than using independent consultants, while others questioned whether the proposal actually would achieve its stated savings. 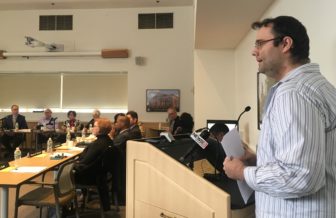 Even with the consolidation, the schools will remain $13.2 million in deficit next fiscal year as the plan rolls out, a 3 percent shortfall. The next two fiscal years are projected to be in the black if the full savings from the consolidation are realized.

Even if state aid and enrollment remain flat, however, the savings from consolidation is not enough to put the system on solid fiscal footing for long. Projections show the system will be back in the red in four fiscal years.

“We further question why there is a disproportionate funding reduction proposed for the community college system compared to other state higher education institutions, despite the fact that our community colleges educate more Connecticut college students than all of the other public institutions combined,” said John Shafer, a faculty member at Middlesex Community College.

Matt Fleury, the chair of the board, said he thought the board had a reasonable basis on which to advance the plan and that “there really is no credible alternative that can even approach the kinds of savings we have to achieve here and can achieve through this proposal.”

Ojakian did acknowledge that some, including certain presidents of the community colleges, do not approve of the plan.

“I appreciate that not everybody is going to agree with this, I get it,” Ojakian said while also asserting his team received support from many faculty and staff members.

The CSCU president also assured the opponents that student services wouldn’t be housed at the system’s office in Hartford and that the goal of the consolidation is to provide services for students at the locations where they need them.

“We all know there have been winks and nods; nobody doubts what the outcome will be, but this so-called Students First plan is an emperor with no clothes,” Spector said.