As Congress readies tax overhaul, an accountant explains its impact on Connecticut taxpayers 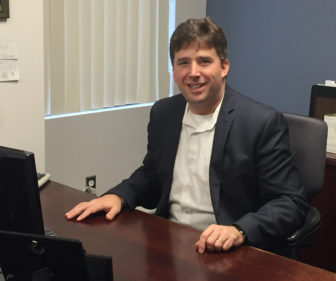 Andrew Lattimer, a certified public accountant and partner at BlumShapiro.

As a historic overhaul of the nation’s tax code nears the finish line, Connecticut taxpayers have deluged their accountants with questions over its impact on their households or businesses.

“As a tax practitioner I’m kind of excited to see this happen, but at the same point there’s a lot of anxiety out there as well,” said Andrew Lattimer, a certified public accountant and tax specialist at the West Hartford office of BlumShapiro.

There hasn’t been such an ambitious attempt to change the federal tax system since 1986, when former President Ronald Reagan cut taxes to promote corporate growth and shrink the size of government. That “supply side” economic theory resulted in huge deficits.

Reaganomics has been revived in the new tax plan. It’s GOP authors (no Democrat on Capitol Hill supports the plan) say cutting corporate taxes will stimulate growth and bring back jobs that were lost as American companies decided they would pay lower taxes if they located their business overseas.

The 560-page tax plan lowers the corporate tax rate, now as high as 35 percent, to 21 percent. It also lowers individual rates and increases the child tax credit. But the $4,050 exemption every member of a family can claim will be gone. 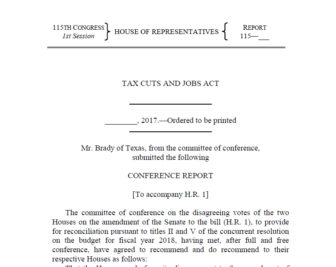 And while the tax rate cuts for businesses are permanent, those for individuals are not.

Republican drafters of the plan also say it will help keep more money in the pockets of working Americans, but concede there are some people who may pay higher taxes, especially taxpayers who now benefit by being able to deduct the high state and property taxes they pay in states like Connecticut, where taxes and the cost of living are high.

Under the final tax plan, the deductibility of state income and local property taxes is capped at a total of $10,000.

What kind of impact do you think it will have overall on the people of Connecticut?

I think middle class people probably will see a very minor change. I think upper income people, especially those who have two, three, four million dollars of taxable income every year, will see the most impact in the sense they will pay a little more in taxes. Missing out on the state income tax deduction will, I think, have a negative impact on them.

Sure, what they’ve done is change the $10,000 limit on local property taxes so it can also be used to include state and local income taxes. So for someone who pays less than $10,000 in property taxes, they’ll be able to supplement that deduction with state income taxes they have paid. Unfortunately, a lot of clients that I deal with, their property taxes are way above $10,000, so the fact that they’ve included state and local taxes in there doesn’t necessarily help them.

But it should help some of the other clients I have, middle-class clients, who pay less than $10,000 in property taxes. They will now be able to utilize the entire $10,000 deduction.

The new tax plan would take effect in the 2018 tax year. Is there anything taxpayers can do in the remaining days of the 2017 tax year to take better advantage of deductions before they disappear or are curtailed?

I am telling all my clients to pay their state income and property taxes before year end.  As long as the property tax has been assessed they can pay it in December.

The near doubling of the standard deduction, to $12,000 for individuals and $24,000 for married couples, who is that going to help in Connecticut?

I think it will could help some middle class and some lower-income people. For a couple who is making maybe $100,000 and not making a lot of charitable contributions or paying mortgage interest because maybe they rent, that’s going to help them lower their taxes because they were not getting $24,000 in deductions before.  And with the lower tax rates, that should be a windfall for them.

The House tax bill eliminated the medical deduction. But that provoked a big pushback and in the final bill it looks like it will be more generous than it is now. Now you can deduct all medical expenses that exceed 10 percent of your adjusted gross income. In the new tax bill that has been lowered to 7.5 percent.

There are changes to the alternative minimum tax, aimed at preventing the very wealthy to pay no or little taxes because they have a lot of tax breaks. About 5 million Americans pay the AMT, nearly 100,000 in Connecticut.  The final bill eliminates the AMT on businesses, but for individuals only lifts the threshold on those required to pay the AMT. How will that affect Connecticut taxpayers?

Since most people in Connecticut had to pay the AMT because they took state and local tax deductions, and those are limited now, there will be a lot of people that will not fall into the AMT anymore.  Those people will be taxed at the regular tax rate and if it’s lower than 26 percent, they will do better. But I think most of the people who were paying AMT, my guess is they will be paying plus or minus $500 from what they are paying now.

As far as “pass-though” businesses, the final bill settled on a 20 percent deduction for these small businesses. What is a “pass through” and who might be helped in Connecticut by this new tax break?

I think this new tax break will help a lot of companies  in Connecticut, because there are a lot of family-run companies in Connecticut that are either an S-corporation, or a partnership or a sole proprietorship, and all those entities would be considered pass- throughs. So, essentially, they would be getting a 20 percent deduction to help reduce what they pay on their net income.

What kinds of businesses would not be able to take advantage of this new tax break?

So that’s going to cut out a lot of people, right? So the mom-and-pop shop will get it, but not the partnership of doctors down the street…?

That’s right, because those are service companies.

Corporations in Connecticut, are they going to benefit much from the new corporate rate? Because a lot of pay less than 21 percent or about 21 percent now.

I think it depends on the company. I think some of your bigger public companies, that’s in line with what they were paying already. But I think some of the smaller companies that are not public, or are public but smaller and heavily concentrated in Connecticut and not heavily concentrated overseas, I think those kinds of companies will see a huge benefit because they may have been paying at 34 or 35 percent and now they will be down at the 21 percent tax rate.

And that might create new jobs as the Republicans have promised?

We can only hope.

I do not think so. I think it might be a simplification for some people in lower tax brackets, but for companies, especially if you own a pass-through, or even if you own a C-corporation or are wealthy, there are some complexities that are going to make filing your taxes more difficult than it is today.

I think some people are concerned that it’s a little more complex now and that adds to the fear of what’s happening.