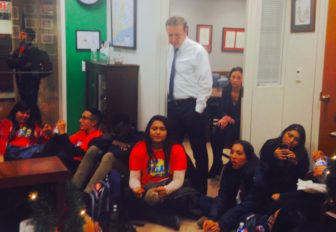 Washington – Eighteen young undocumented activists from Connecticut staged a sit-in at Sen. Chris Murphy’s Senate office Tuesday, demanding the Democratic lawmaker vote “no” on a must-pass budget bill this week if Congress fails to approve protection for the youths known as “dreamers.”

Murphy listened to the stories of the youths, who were brought to the United States as children or infants. The senator thanked them for “speaking truth to power” and said he was “proud to call myself an ally and a friend of the cause.”

“I have not said the magic words that you want me to say, in part because I’m trying to be part of a conversation on whether we are better off with additional leverage in early January, when we are facing big cuts as part of sequestration, or if we are better off making the stand right now,” Murphy said. “I consider myself to be just as big of a champion today as I’ve always been for you.”

But the senator drew calls of “shame” when he left the dreamers to meet with his young sons, who were visiting the Capitol.

Hundreds of dreamers from across the nation are on Capitol Hill this week to push Congress to pass a bill that would protect them from deportation.

President Donald Trump in September ended Obama-era protection for Lopez and hundreds of thousands of other immigrant youths, about 8,000 of them in Connecticut, saying it is up to Congress to pass legislation to provide them protected status.

But Congress has not acted and is divided over how generous that protection should be, and whether it should contain a path to U.S. citizenship.

Trump allowed some dreamers whose two-year Deferred Action for Childhood Arrival, or DACA, status was expiring to renew it for two years.

But others will begin losing their status and be subject to deportation beginning in March. And some who were eligible to renew their status, like Lopez, were unable to do so and could be deported sooner.

On Tuesday he stood among the other dreamers in Murphy’s office and told of his arrival with his family from Mexico as a 3- or 4-year-old, his arrest by Border Patrol agents when he was 7 and the family went to visit his father, who had returned home, and other difficulties undocumented youth face growing up.

But he said he is undeterred.

“There is a lot of tenacity in our community,” Lopez said.

The undocumented activists want Congress to pass the DREAM Act, which would give legal status to immigrants who have entered the United States before the age of 18 and have lived here for at least four years before the bill’s enactment. After five years as a legal permanent resident, applicants could apply for citizenship.

To qualify for protections under the DREAM Act, applicants also must have been admitted to a college, university or other institution of higher learning, earned a high school diploma or general education development (GED) certificate, or be enrolled in a secondary education program and seeking a diploma or GED certificate. Applicants also must be free of convictions for certain criminal offenses.

But Democrats are backing away from a pledge to force a vote this month on the DREAM Act. That has angered the dreamers, but is likely to avert the threat of a government shutdown at a critical moment in spending neglliotiations with Republicans and Trump.

The deadline to pass the new budget bill  — which would fund most of the government until Jan. 19 but fund the Pentagon for the rest of the fiscal year and boost the defense budget, is midnight Friday. While about a dozen Democrats have vowed to withhold their support of the legislation if Congress does not first pass the DREAM Act, their numbers are not large enough to exert leverage.

Murphy told the youths that had taken over the reception area of his office that “my goal is the same as yours—my goal is to get the DREAM Act passed.”

That was not good enough for Camila Bortolleto, a founder of Connecticut Students for a Dream.

“We want him to be a hero for dreamers,” she said.

While he “didn’t say exactly what we wanted,” ‘Bortolleto said, Blumenthal was “stronger than Murphy” on the issue. Nevertheless, the Connecticut dreamers said they also might visit Blumenthal’s Senate office if they have time.