Trump: Never thought of dropping Gorsuch because of his comments to Blumenthal 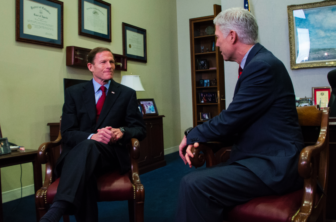 Washington – President Donald Trump on Tuesday blasted as “FAKE NEWS” a report that he considered pulling the nomination of then-Supreme Court candidate Neil Gorsuch because the judge criticized the president’s escalating attacks on the federal judiciary to Sen. Richard Blumenthal.

“A story in the @washingtonpost that I was close to ‘rescinding’ the nomination of Justice Gorsuch prior to confirmation is FAKE NEWS,” Trump tweeted. “I never even wavered and am very proud of him and the job he is doing as a Justice of the U.S. Supreme Court. The unnamed sources don’t exist!”

The Washington Post late Monday said Trump vented angrily to advisers after Gorsuch was critical of the president in a private meeting with Blumenthal in February,  a member of the Senate Judiciary Committee who would vet the nominee.

Blumenthal said Gorsuch told him the president’s attacks on the federal judiciary were “disheartening” and “demoralizing.”

“The president worried that Gorsuch would not be ‘loyal,’” the Post reported, telling aides he “was tempted to pull Gorsuch’s nomination — and that he knew plenty of other judges who would want the job.”

But Blumenthal said he did not misspeak about his conversation with Gorsuch, saying, “I have absolutely accurately stated what Judge Gorsuch said to me.”