A federal investigation into whether the Connecticut Democratic Party illegally raised money in support of the re-election of Gov. Dannel P. Malloy ended in February without criminal charges — but, as the party reported Wednesday in a campaign finance report, not without significant legal bills.

In its monthly report to the Federal Election Commission, Democrats reported spending nearly $165,000 last month on legal fees related to the federal investigation, most of which went to reimburse two of the state party’s political and fundraising consultants for legal representation during the inquiry.

The party paid $125,000 to Global Strategies, a political strategy and polling firm that employs a top Malloy campaign adviser, Roy Occhiogrosso, and $9,302 to O’Neill & Associates, a lobbying, fundraising and public-relations firm based in Boston.

Michael Mandell, the party’s executive director, said the payments were made under the terms of its contracts with the consultants, who found themselves enmeshed last summer in a criminal investigation by the U.S. attorney’s office of the Democrats’ 2014 fundraising.

The party also paid $28,548 to Perkins Coie of Washington, D.C., and $1,377 to Silver Golub & Teitel of Stamford, two law firms that represented the party during the investigation. The Democrats still owe $25,248 to Silver Golub.

The payments represented about 14 percent of the $1.2 million the Democrats spent in the first 11 months of 2017 through their federal campaign finance account. The party was left with $79,582 in cash on hand as of Nov. 30, compared to $556,572 at the same time four years ago.

The party expects its total costs for legal representation during the federal investigation to total $250,000.

The U.S. attorney’s office opened its investigation in July 2016, a month after Connecticut Democrats agreed to pay a record settlement of $325,000 to resolve a long fight with the State Elections Enforcement Commission over its ability to subpoena emails and other internal communications in connection with its own inquiry into the 2014 fundraising.

The party admitted no wrongdoing and characterized the settlement as “a voluntary payment,” one roughly equivalent to the value of a disputed mailing promoting Malloy and paid for out of the party’s federal campaign account. The commission called it a penalty.

The settlement short-circuited the state inquiry while the commission and the party still were litigating the state’s ability to subpoena emails and other records from the state party.

How the Democratic Party came to solicit state contractors, regulated industries and beneficiaries of state aid for campaign contributions in 2014 is “highly privileged and confidential,” the party’s lawyer, David S. Golub, told a Superior Court judge in December 2015.

The party never was required to produce the records. 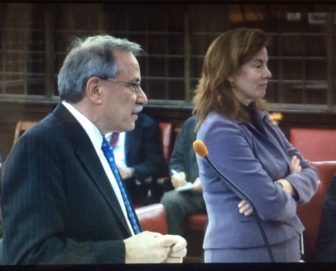 A central issue was the conflict between state and federal campaign finance law. While Connecticut law bars state contractors from donating to state campaigns, federal law dictates the rules for raising and spending money that is used for get-out-the-vote efforts in federal election years, when state elections are also held.

The result is state parties maintain state and federal accounts. They are free to deposit state contractor contributions in the federal accounts, which provide significant support for state campaigns by helping deliver voters to the polls.

Essentially, campaigns operate under two sets of contradictory campaign financing rules: one provides public financing to candidates who agree to accept donations of no more than $100 and abide by spending limits that vary by office; the other allows state parties to accept maximum donations of $10,000 a year and spend unlimited amounts supporting their candidates.

Malloy benefitted from both systems.

The federal inquiry began after Charles Urso, a retired elections investigator and FBI agent, publicly pressed for a deeper look at the propriety of Malloy accepting $6.5 million in public financing while also benefitting from the unlimited spending of the state party.

To participate in the voluntary public financing program, Malloy had to sign an affidavit promising to abide by spending restrictions and accept maximum contributions of no more than $100.

On Feb. 2, Golub said the three assistant U.S. attorneys conducting the investigation called him and lawyers who represented individuals questioned in the case to say the matter had been concluded.